Encourage interactions and grow your audience and brand awareness with a Twitter Giveaway. Do it all in an automatic way, and obtain a certificate validating the transparency.

Gameops.com has introduced a series of Social Media Promotions (ePromos). We have insights on execution as well as resources and tools to create these social media promotions.

This feature is focused on a Twitter Giveaway. Like the Instagram Giveaway a Twitter-based promotion can be simple to run, but to truly capitalize on the power of these giveaways you are best served to utilize some more advanced tools. Selection of winners, management of winners and a Certificate of validity are just some of the features included in this package.

These promotions encourage interactions and grow your audience and brand awareness. Pick a winner from among users who retweet or reply to your posts, or from among your followers. You can also pick a random winner from among the users that mention your brand and publish content with your campaign hashtag. Do it all in an automatic way, and obtain a certificate validating the transparency.

Let’s look at a couple examples.

Unlike some other social networks, Twitter allows you to run a giveaway based on sharing (aka retweets/RT’s). Just create a post which explains the giveaway, and ask your followers to retweet it to their friends. This is a great way to make your posts more visible and increase your reach.

Here’s an example from Rondiaz Rum. They decided to celebrate the start of summer – and National Rum Day – with an on-brand Twitter giveaway. Participants just had to retweet and follow the brand. 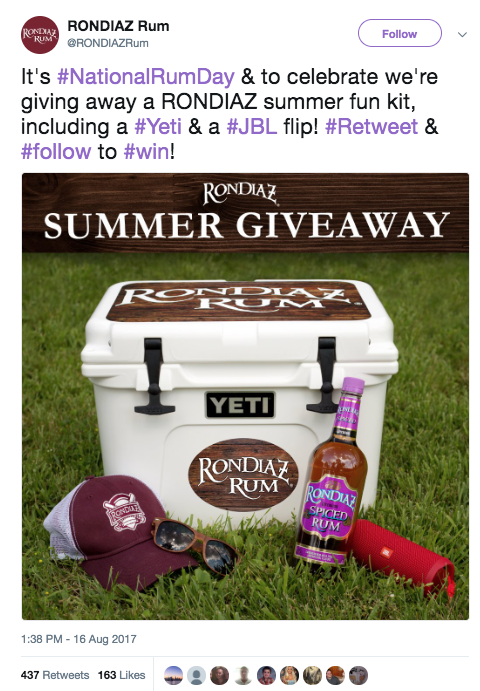 The goal here is simple, drive impressions as your followers and fans retweet your message. In exchange for sharing your message with their followers people have the chance to win prizes.

Run an exclusive giveaway for followers

If your goal is to increase your actual followers, you can simply require following your account to win.  Run a Twitter giveaway which is exclusive for your followers. Encourage Twitter users to follow you before the competition closes, then import your list of followers to to the app to select a winner.

Interaction and engagement are the key to long-terms success on social media. Asking for retweets and follows is a great place to start. But your next step should be creating quality, user-generated content and conversations. Run a Twitter giveaway for followers who reply to a question or comment with interesting and original ideas.

Here’s an example from a bookshop. As part of their Back to School sales campaign, they asked followers to share their favorite read. 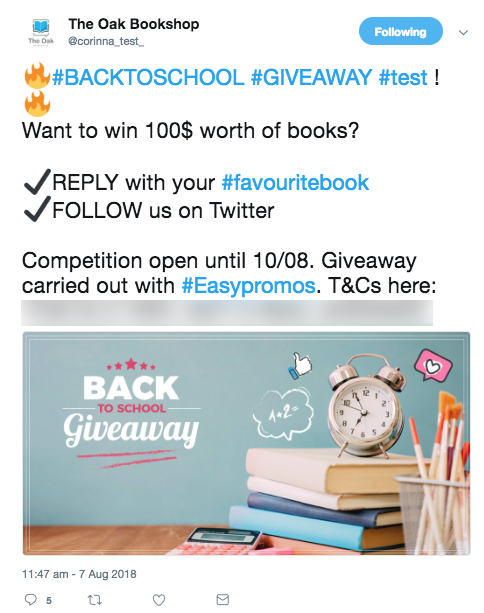 When you ask users to share their opinions and experiences like this, you demonstrate that you are ready to listen to customers. And with luck, you’ll spark a conversation which will boost your brand’s visibility even further.

Another way to encourage original content is a Twitter giveaway with mentions and hashtags. Instead of simply replying to a Tweet, ask users to @mention your profile and use your #customhashtag.

Feedback from your followers with a single-question survey

Twitter is a great place for sharing ideas, getting opinions, and hearing hot takes. Twitter even includes its own features to help, such as polls embedded in Tweets.

However, it’s difficult to break down the results of an embedded poll to select a winner. Instead, try creating a survey by asking users to reply to your tweets with a specific hashtag.

Once your Twitter giveaway is up and running, you’ll want to maximize engagement. You can include up to 10 tweets in a single giveaway, including promoted posts. Alternatively, you can run repeated giveaways on a single tweet.

As noted, Twitter promotions are simple to run on a smaller scale, but our promotion allows you to tap into some powerful benefits.

Your promotion’s call to action can be anything you can dream up. For example use your team’s hash tag with a call out to fans to tag who they’d love to watch games with. Assign the prizes you want to give away and you are off and running. 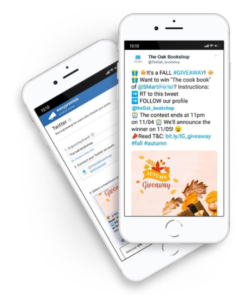 There are are three ways you can get started on your next great Twitter ePromotion.

June 2020 Party in the Back Podcast