No one stokes the passion of your fans and makes your mascot the star of the show better than The King of Sports.

The Story of the King
By Jon Cudo

Booed. Jeered. And Heckled and Mocked.

While that response is normally not what one seeks out, last week it was a good thing.

You see, it’s good to be the King.

Comedian Andy Kaufman once said: “Everyone loves a villain” when describing his foul alter-ego Tony Clifton. Noted wrestling heel Rowdy Roddy Piper is eager to point out to the more-famous Hulk Hogan that the fans wouldn’t have loved Hulk Hogan so much if they didn’t hate Roddy Piper more.  From that logic, The King of Sports was created. The anti-mascot, whose job is to make the fans love their mascot even more.

I am a professional sports mascot by trade. My job is to fill the 2-minute time out breaks that are caused when television goes to commercial. Entertain and distract the fans until the game starts again. In some cases, motivate the fans to get behind the home team, get emotionally involved in the game and most of all – to have fun.

Nearly 15 years ago I prowled the court as a timber wolf in Minneapolis. Each game I performed several time out skits and a few times a year I cast myself as the hometown hero, fighting off some foreign and notably “fake” mascot from the visiting team.

When Michael Jordan and the Bulls came to town, I may play matador to the Chicago Bull. Inside our ratty and implausible bull costume was a friend of mine who was paid in chicken wings and beer to dress up like a sickly bovine that would be outwitted by the hometown wolf.

On other occasions it got even more bizarre. I would occasionally defend the home court against a pathetic character we called “Hot Head.” We told our fans that the character was the Miami Heat mascot. Dressed in an abysmal foam flame head and a hand-made jersey was my trusty assistant Jeff. Needless to say Crunch always got the best of Hot Head and his ilk.

One thing always stuck out to me when we performed this ridiculous 90-second sketch. Despite our “fake” costumes that were sometimes made on the car ride to the arena – the fans believed it – or wanted to.

They really thought the Milwaukee Bucks had a mascot that looked eerily similar to the Rudolf the Red Nosed reindeer costume you could rent for $40 at Teener’s costume shop 3 blocks from the Target Center arena. Except Milwaukee’s a”authentic” version had black electrical tape on its nose.

They really believed the Phoenix Suns Gorilla and Hugo the Hornet all came to the my home games and only to lose in a cartoon duel with the local wolf character.

This ultimately set the stage for the King. The Sacramento King to be exact. From the woeful Sacramento Kings, or as they were called then the Sacrificial Things. 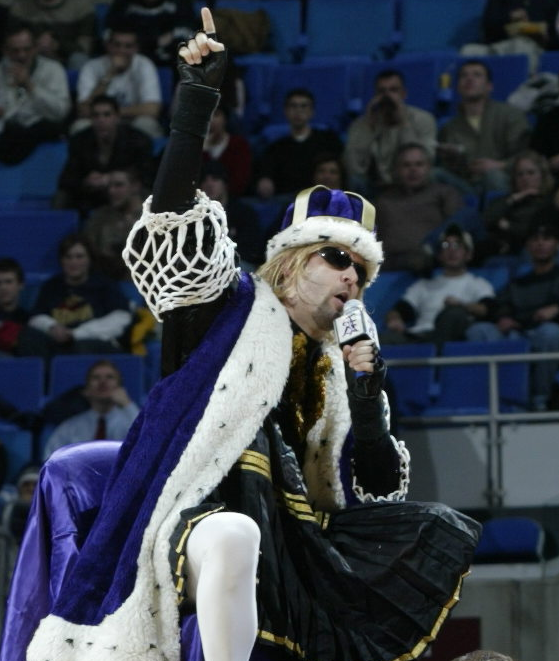 While I could have bribed another unsuspecting friend into playing this royal rogue – I didn’t. It sounded like way too much fun for me to pass up, so I took the role myself. And in doing so found the character that I most enjoy performing as – The King.

Riding into the arena carried high on a throne was exactly what Andy Kaufman and Roddy Piper were talking about. A villain. And everybody loves a villain, or loves to hate a villain – as the case may be.

At the end of the night the local mascot would, of course, get the best of the King, and send him packing back home – much to the noisy delight of those same “quiet” fans.

It’s been about 12 years since I was first carried out on a throne to a chorus of boos and heckles. I have performed the show about 50 times since all around the country for basketball, hockey and baseball teams at all levels.

If there is a tie that binds all sports fans it is that they want to believe that they are the loudest, that their team is the best, and that their mascot is better than the rest. And like a good villain should, I am there to prove that in the end that they are right.

One week ago I was carried onto the court at a New Orleans Hornets basketball game. I riled up the fans. I got under their skin and in the end their hometown mascot Hugo the Hornet got the best of me and sent me packing much to the delight of the crowd of 17,000 Hornet fans.

One week ago I was booed by over 17,000 people. Glorious boos that I can still hear today and look forward to hearing again.

Everyone loves a villain. And some of us even love being the villain. This story was originally prepared as a speech for the Silicon Valley Toastmaster’s Club and performed February 12, 2003 and adapted into an essay for Gameops.com.

Jon Cudo is a 30-year veteran sports entertainment performer, including a 7-year term as the NBA’s Minnesota Timberwolf Crunch, 3 years as the Portland Fire’s mascot Spot, 15 years with the Cleveland Cavaliers, as well as freelance characters like the The King of Sports. Cudo is also the founder and editor of the Gameops.com.