No one stokes the passion of your fans and makes your mascot the star of the show better than The King of Sports.

After his debut 25 years ago, the King has expanded the Kingdom from the NBA to minor league hockey, baseball, basketball and arena football.  The Royal Rogue has received high praise for his unique ability to draw a strong response from even the most conservative crowds.

The King’s copyrighted show is made up of optional pre-game promotion, in-game interaction, and three or four time-out performances by the King.  Each designed to engage and entertain your crowd while making the hometown mascot the star of the Night.

You can see a typical show set-up in these three videos. 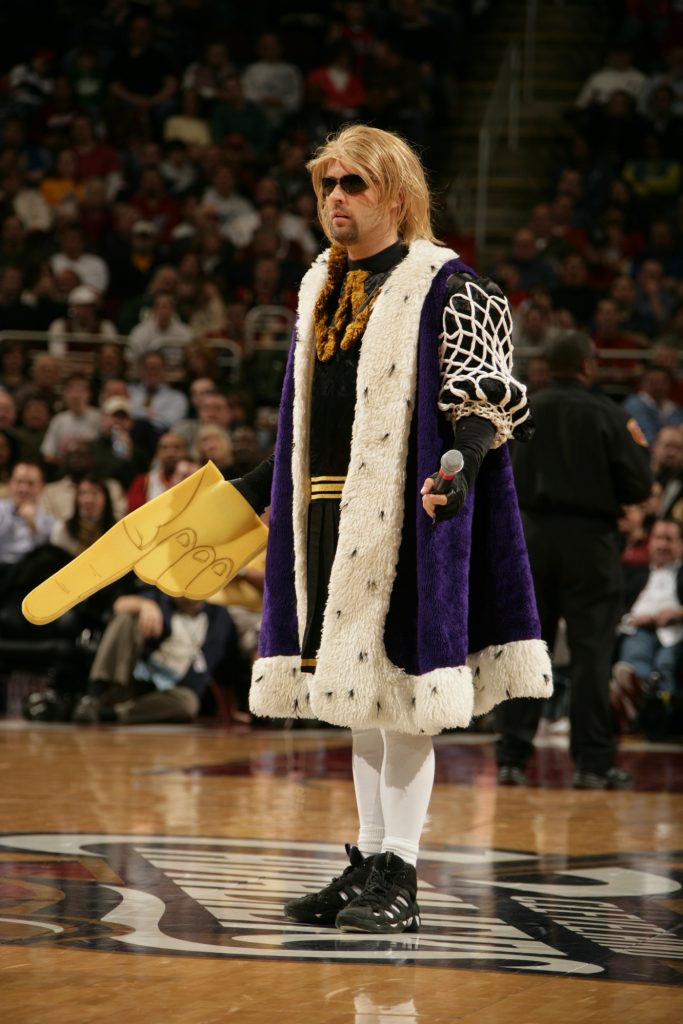 “Simply the best act for its cost in the industry.   The best crowd interactive act in the business.”
– Mike Cristaldi, Rockford Lightning

Gameops.com:  This is a pretty unique turn on in-game entertainment.  What’s the high point for teams who use the King of Sports?

The King of Sports:  The high point is getting the chance to meet me, carry my bags into the arena and bask in the goodness of my amazing charm and good looks.

Unique indeed, nothing is like me.  All these other acts of uni-cyclesrs and jugglers come in entertain your fans and walk out the door.  They’re great and you need them, but what you also need is to shine up your own show and mascot occasionally.  That’s what’d I do.  I stoke the passions of your fans and I make a hero out of your terrible mascot.  Your fans will be loud and proud to prove I’m wrong and your mascot will be a bigger star than before I strode to center court to introduce myself.  No other act does that… as far as I know no other act even tries.

So that’s the high point.

Gameops.com:  Any low points for you along the way?

The King:  It’s all part of the show to boost your crappy mascot into the stratosphere. But I can’t lie, sometimes when I am getting beaten down by your totally inferior mascot … that’s a low point.

Yet it’s for a greater purpose, so I do it.  But it’s really a shame to give so much of my amazing greatness to some lesser furball in an effort to elevate them.

Gameops.com:  Should any team want to bring this level of “greatness” to their game, where can they reach you?

The King:  I can hear your sarcastic tone right thru the keyboard, don’t think I missed that.  WHEN teams decide they are ready for the Royal Rogue, they can you use the form before.  Serious inquires only.

The King:  Just shut up and post this already.

Read the Story of The King essay on the next page.

Kenn Solomon and Jon Cudo have performed for over 30 years each and have experienced the evolution of pro sports. They share their unique perspective in this edition of the Between the Fur Podcast.

May 2019 Podcast with Jon Cudo and Rob Wicall. The duo discusses the recent article called Mascot Mechanics, plus the originality of the Riverdog’s promo schedule and breaking news on about the podcast.