T-shirt launches can be a safe part of your presentation with consideration to the risks. You can provide entertainment for the Homer Simpsons in your crowd, while minimizing the risks for the Maude Flanders.

Safety Features – Our regulators are set at a low safe level and in addition, have a safety release system built in so that any over pressurization will be instantly released. Our units are designed so that they do not freeze up during use, every component in the launcher is designed to handle high pressure.

What we can shoot – Our launcher can shoot hot dogs, submarine sandwiches, T-shirts (up to three at once), ping pong balls, tennis balls, confetti and streamers (we have developed a specialized lifter unit for any smaller diameter items), towels, and almost anything that is soft and light that can be rolled into a 3″ diameter.

Distances – The Master Blaster can be shot from anywhere on the field or in the crowd. Since the unit has the ability to shoot as short as 10′ and as long as 350′ (medium sized units). We recommend that the unit be shot at a 60 degree angle which allows for the object to fall softly toward a cheering fan. Our large scale units are custom built for 100,000 seat stadiums and larger venues. 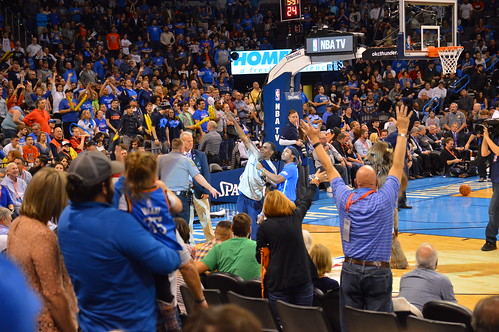 Training etc. – Our unit comes complete with a fully illustrated instruction manual, and when the unit arrives we call the client and walk them through using the unit for the first time. We also have a 24 hour 1-800 number that can be called at any time for assistance in the operation of the unit or any possible problems that may occur.

Other information -When a client purchases The Master Blaster we have a full set of usage and performance ideas that we offer to them. Our new monthly newsletter will also be containing tips, tricks and ideas for our clients.

Perhaps the most important element of the launch is what you are shooting and how it is prepared. Many cannons demand that shirts are wrapped to a certain girth to maximize distance. However there is always some variation on how tightly shirts are wrapped. (The same can be said for shirt slings). Use caution when wrapping shirts. A tightly wrapped shirt can become a 1 pound rock-hard projectile. If you use shirts, wrap shirts so they retain at least some softness.

In one fan lawsuit against a baseball team where a fan was struck by a launched shirt, the fan explained that he never expected a shirt coming. When you are launching shirts to fans, all the focus of the game operations should be on the launch. The shooter/launch should be clearly visible to the fans. The PA should announce that a shirt launch is underway, scoreboards can be used to show the launch, and you should limit other activities. Do everything you can to let the fans know shirts are coming their way.

Many teams present the shirts along with many other elements in an everything goes time out. I call time-outs with blimp flights, music videos, jumbotron presentations, mascot stunts, cheerleaders and dancers performing at the same time, “Circus Time-outs.” While I understand the idea of getting everything out there, I have always thought this presentation style minimizes every element and leaves fans with a visual spectacle that fails in most other regards.

My critique of these Circus Time-outs may be subjective, but in the case of adding a shirt launch to that mix, I believe it adds to the chances of fans not watching any one element (such as the shirt launch), which may be the launching of a 1 pound tightly wrapped projectile, are increased…as is the danger of an unaware fan being struck.

For this reason, I recommend that the focus is solely on the shirt launch, and that only one launch is taking place at a time. If you use a team of shooters, it is more effective to use their collective efforts in getting the crowd involved than it is to merely shoot 2 or 3 times as many shirts.

Performers have an incredible responsibility and need some practice and training. Florida-based Sports Magic Team spent several hours with new entertainers on the slingshot and cannon launch. They hold a strong belief that anyone can shoot a shirt, but not everyone can do it in a safe and entertaining manner. 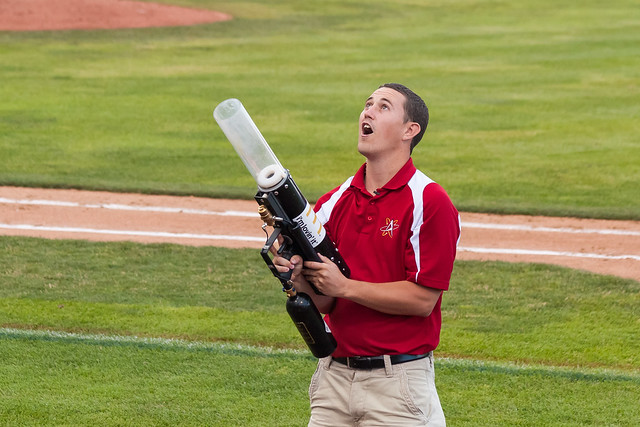 Training of this kind includes how to wrap shirts, how to coordinate with team members the loading of the sling, how to effectively work the crowd, and how to follow the shots. This is an important aspect, since fans follow the lead of the performers. After shooting a shot, the performers should watch the shot all the way until it lands. First to see where the shot went and make adjustments on the next shot, but also to make each shot feel special. This also keeps the fans focused on any incoming shirts. If you fire one shot into the upper deck quickly, reload and shoot another, you risk having fans who are watching the first shot miss the trajectory of the second shot.

T-shirt launches can be a safe part of your presentation with consideration to the risks. You can provide entertainment for the Homer Simpson’s in your crowd, while minimizing the risks for the Maude Flanders.  But to do so takes practice, consideration for the safety of your fans and staff, and extreme caution a during any launch.

**Thanks to Brian, Scott and Kenn for their assistance and insights. Note this page was updated from a Gameops.com article from 2002.

Gameops.com has a selection of launchers in The Store at Gameops.com.
We feature the high quality launchers from War Machine as well as a variety of T-Shirt Sling Shots.

More: For a further look at launchers and how to build one (not suitable for in-game use, but interesting nonetheless) see Whoosh Boom Splat.

Gameops.com Plus is our value-added membership site. It is a network to enhance the fan value of events.  Three times a month we gather for a hour long discussion on an industry topic with a special guest to share their insights. Leaders like Claire Czerniuk, Jonny Greco, John Franzone, Barry Anderson, Colleen Flynn, Jackie Maldonado, Todd Bosma, and Kari Norvell have discussed topics from dance teams to creating custom music. December calls feature Zoltan Berensci from the World-Famous Harlem Globetrotters and mascot prop call with Jeph Harris and more on the Gameops.com Plus Network.  Free One Month Trial is available now on Gameops.com PLUS.

What Was The Last Thing You Did Before You Proposed?

Between the Fur: Robert Shields