Fans may be seeing OKC Thunder mascot Rumble for the first time or the last time, but they will always see his best effort.

Wanted to share a special story from one of the NBA mascots. A reminder of what these performers mean to their fans and in their communities.

A few years ago I had the privilege to speak at the NBA Mascot Conference in Minneapolis. My presentation centered around the Water Cooler Philosophy we highlight here on Gameops.com.  I talk about the importance of creating moments people will talk about, citing Bill Veeck’s wisdom:

“It isn’t enough for a promotion to be entertaining or even amusing; it must create conversation.  When the fan goes home and talks about what he has seen, he is getting an additional kick out of being able to say he was there.  Do not deny him the simple pleasure, especially since he is giving you the invaluable word-of-mouth advertising to add to the newspaper reports.”

Part of creating something special is the drive and focus to do that on every night. Every game. Every appearance.  Every time. A quote from Joe DiMaggio says it perfectly.

One of my final slides includes this quote which I just love. It’s a reminder that whether you are at the biggest game of the year or a lightly-attended under-the-radar appearance you have an obligation to deliver.

Like a lot of famous quotes there is some variety to the exact verbiage. The version I usually share is: “There Is Always Some Kid Who May Be Seeing Me For The First Time Or Last Time.  I Owe Him My Best” 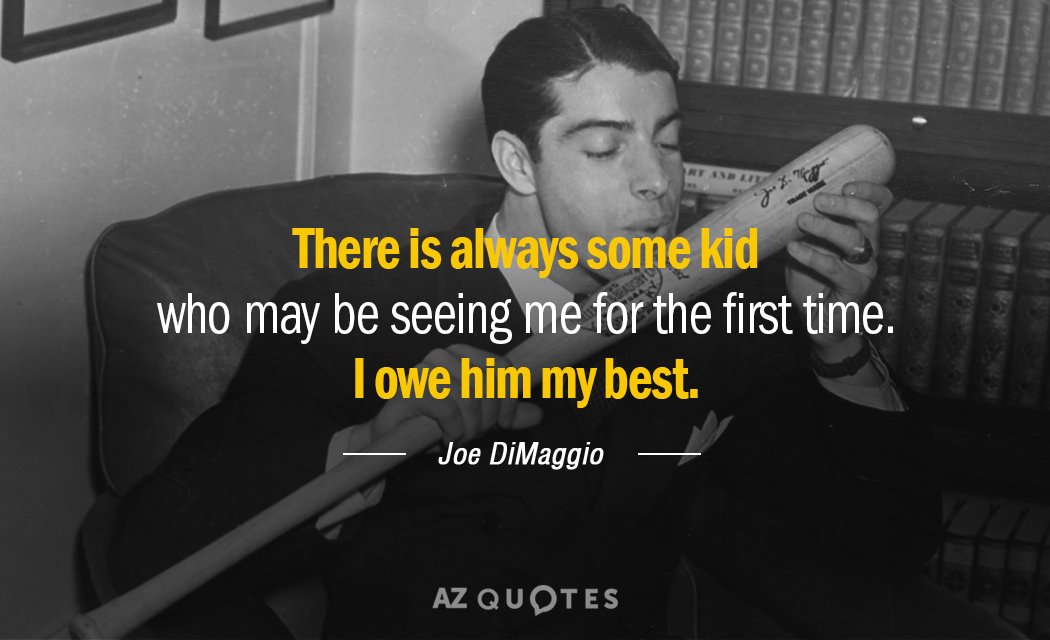 Back to our NBA mascot’s recent experience. This letter was sent to his fellow mascots as a note of thanks and encouragement from Rumble (OKC Thunder).  It is shared here with permission and our gratitude.

We received a request for a visit for an 8-year old. This youngster is one of the most outgoing kids you’d ever meet.  Loves animals, Fortnite and basketball.

He was was diagnosed with a rare form of cancer.  Due to the rarity, location, and aggression of the cancer he only has 2 weeks left with us.

One of his last wishes was to meet Rumble.  We visited him today in his hospital room.  He was fully mobile and actually in the middle of a Fortnite match.  He showed off his mean flossing skills, took us on a tour of his hospital room that was decorated like a jungle, and then we surprised him with a mini hoop and ball for a game of 1-on-1.

We received the request late last week and it’s been weighing on me throughout the weekend and up until the second we walked into the room.

As performers, our goal is to bring joy to everyone we encounter, young and old.  You would think in a situation like this, joy would be absent, but this child, his little brother, his parents, and aunts were OVERJOYED that we could visit.  There were no tears, no sadness, no negativity whatsoever…there was just a little 8-year old boy with a smile on his face and an endless amount of hugs, high fives, and laughs with Rumble the Bison.

Rumble noted he recalled the quote by Joe DiMaggio.  That quote stuck with him. But most of us this about that “first time”. The critical point in making a first impression and winning over a fan. Few of us think of how it may be the “last time” you share a moment with a fan.

“I think I was naïve in the moment that I would be seeing more “first time” kids than anything else and I let the “last time” part of the quote slip out of my mind.  When we received the initial request and I saw “estimated 2 weeks left”, the “last time” part of the quote finally hit me, and hit me hard.  We’re always moving around our arenas and community and at the end of games and appearances wave bye to those people still infatuated by a big furry thing running back of house or jumping into a van.  We always tell our fans in those moments “we’ll see you later” because saying “goodbye” seems too permanent and we always want to see our fans again.  As we left, we said “we’ll see you later”, even though it seems more like a “goodbye”.  But the more I’ve thought about it since getting back to the office, the more I think we were right.  No matter what your religion, belief, faith, creed, etc. I believe that what we do, the impacts we make in our lifetime, we’ll be able to encounter all of those lives we’ve been able to touch again once our “last time” is here.

I type all of this to get the overwhelming emotions out and to reiterate how important each and everyone one of you are and how thankful I am to work with you.  You all are the best of the best, and when there are rough days in costume and you question why you do this…think of memorable fans like this, think of your fans, and think of the lives you may or may not know you’ve impacted over the years of performing.

I love you guys.  Thanks for always giving everyone your best.”

Thank you to Rumble for sharing this and reminding everyone of the power they have to bring joy to people.  And reminding us it can happen anywhere with any fans, so you owe it to everyone to always bring your best. 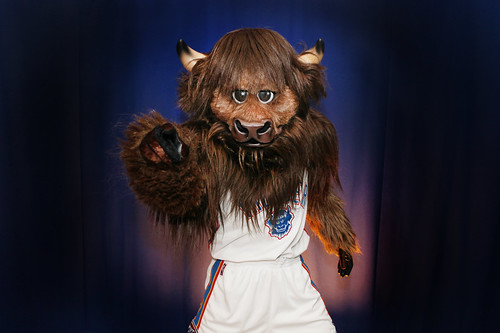 Jerks and a Pig in Durham

Colleen Flynn from Boxxed Up joins the Party to talk about the suite of tools they have developed for mascots and teams. Plus Cameron Hughes on the importance of building traditions and much more.