Rolla Bolla showcases a domination of balance and acrobatics. The Vertigo Cube demonstrates the mastery of shape manipulation & dexterity. Perhaps most amazing is the acts share the same performers.

Rolla Bolla showcases a domination of balance and acrobatics. This high energy, fast-paced act will have fans on the edge of their seats as Simon stacks more cylinders higher and higher! Balancing not only on his feet but also on his hands in handstand form.

The Vertigo Cube demonstrates the mastery of shape manipulation & dexterity. This exhilarating show will keep your fans engaged & wow them from start to finish. They will be in awe of the speed & skill displayed in this performance.

Gameops.com: What has been your high point thus far as a touring act?

Lyric & Simon Arestov: We’re huge sports fans and performing for NBA and NCAA halftimes is amazing each and every time.

One of our most memorable performances was our very first halftime performance at the Maui Invitational Tournament in Hawaii. Great tournament and the beach was right across the street!

In 2013 we did our very first NBA halftime show, and it was for the Denver Nuggets at the Pepsi Center. We are very grateful for the opportunity they gave us, and we have since performed in Denver for the Mammoth and the Avalanche as well. 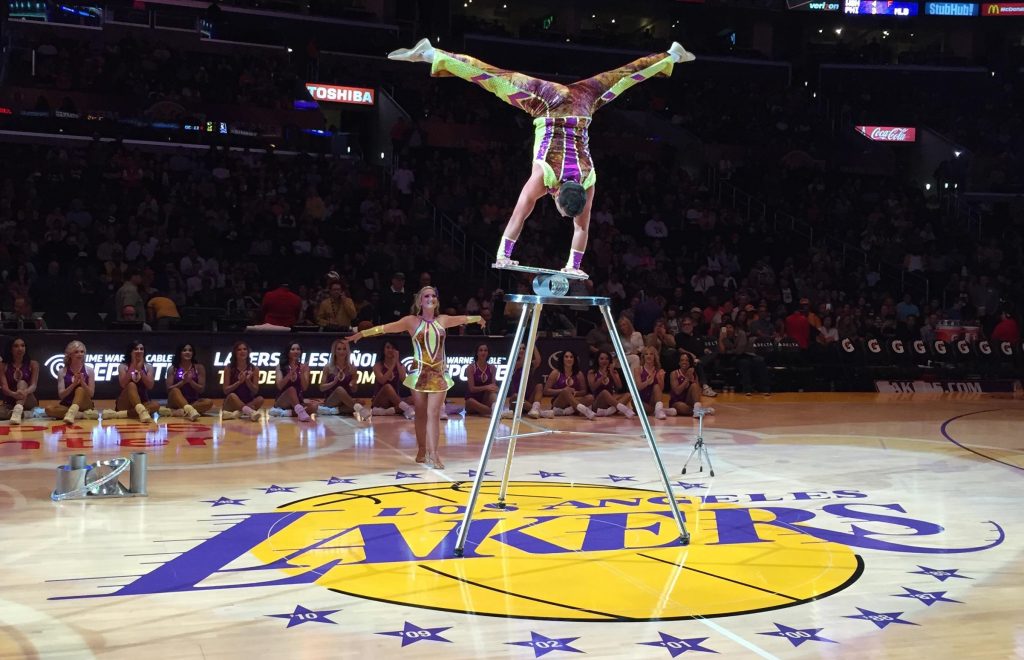 One of our favorite games we got to perform at was at the Allen Field House for the University of Kansas.Kansas was ranked #1 and Oklahoma was ranked #2. It was televised on ESPN, Dick Vitale was courtside with the commentary. The sold-out crowd and the energy was insane for the game and our performance. The game went to triple overtime and Kansas won. We’ve never heard a louder building in our life.

Madison Square Garden also holds a very special place in my heart.  I’m (Lyric Wallenda Arestov) a 7thgeneration performer of the infamous Wallenda circus family.  My family came to America in 1929 & one of the first venues they ever played was MSG w/ Ringling Bros & received a standing ovation for over 10 mins & they had to be brought back to the ring. So, when we have the opportunity to perform where my ancestors did years ago with their great success it’s inspiring for us.

All of the arenas are awesome and special in their own way, but some of our favorites are: Staples Center, MSG, United Center, Pepsi Center, and Amway Center!

Gameops.com: Can you share a low point along the way as you progressed as an act?

Lyric & Simon Arestov:  Something we’ve definitely learned along the way is how to travel as light as possible for the long trips and how to be comfortable sleeping in airports/planes on red-eyes.

Gameops.com: What makes your show special for teams?

Lyric & Simon Arestov: We’ve been performing our entire life.  We touched on my background as a Wallenda earlier, but Simon is a 2nd generation circus performer.  He debuted at 10 months old in The Great Moscow State Circus in Moscow where his parents performed & toured with the show for over 20 years.  Simon then decided to pursue his performance career in North America & left for Canada & the U.S. in 1991.

Beyond our historic performance backgrounds, we present a high energy and high skill balancing act choreographed to the music, and we always try to customize our wardrobe to match the teams colors. Being a balancing act that’s set on a 6 foot pedestal it has the fans on the edge of their seat the entire time as Simon stacks his cylinders higher and higher.

We also provide a unique budget saving opportunity for teams/schools, since we can travel & offer two different acts for back to back games, men’s & women’s doubleheaders, or for games within a few days of each other.

Gameops.com:  Some acts grow and change over time to keep things fresh and interesting.  What changes have you made to the show to keep it evolving?

Lyric & Simon Arestov:  We have not changed too much in the act as we feel it has a good flow and keeps fans in suspense. We do always do our best to color coordinate our costumes to match the home team!

We have added our son Alexander Wallenda Arestov  to the performance. He made his debut in performing with us in the Rolla Bolla at 19 months old for the New York Knicks. We highlight him as Americas Youngest Halftime Performer.

He is 8th generation circus performer on the Wallenda side. Now at 5 years old he has performed for dozens of NCAA Teams and a handful of the NBA Teams, 3 of the WNBA teams including this Sept. we performed for the Sun Semi Finales Playoffs, NHL Playoffs for the Avalanche and NFL Super Bowl Fan Experience in Tampa Florida.

Sometimes we do collaborated with teams on themed night for example: The LA Clippers had us performing on 70’s night and asked how can we do a tribute? So we dressed our son in skinny jeans, a wife beater white tank, armbands and he cam out to Queen dressed a a mini Freddy Mercury! We dressed in a Dinosaur costume for NC State for there Jurassic Park theme and performed his part as a Dino. So if a team allows us enough time to cut music and build costumes we like to collaborate and do some fun themes with them.

Gameops.com:  How did COVID change your show and are you finally back to a regular schedule?

Lyric & Simon Arestov:  COVID Changed our show by us not being able to perform pretty much at all. Then as some teams got creative. We had the honor to work with first the Orland Magic. And the performed in the 300 section on a staging area.

It’s not center court but we were thrilled to be back in the Arena and in the atmosphere of live entertainment and sports. Then that same season we performed 2021 Playoffs Game 2 for the Sixers in a similar set up on a stage in the 200 section I believe.

There were still some challenges last season for us with covid as some teams had tighter guidelines and restrictions. But we are performers and we learn to adapt to situations.

I do feel we are back better and our schedule is looking great at this point. Its a blessing to be in this industry and we not only do it for the living but we love it!

Lyric & Simon Arestov:  We performed a quarter brake with a variation of our Cube act for the NBA Finals in 2019 in Toronto for the Raptors. This was a dream come true for Simon. Especially as a true heart Raptor fan and growing up in Canada. This is for sure one for the books as it was the first for a finales game outside of the US, We performed for one of Dukes last home games of the season and our son got a fist bump from the iconic Coach K. Sept. we performed for the Sun Semi Finales Playoffs, NHL Stanley Cup Playoffs for the Avalanche and 2021 NFL Super Bowl Fan Experience in Tampa Florida and in 2021 we were one of the Halftime acts that the NY times ran a story on.

Where can teams reach you?

Cameron Hughes wants you to JUST GET UP and live every experience to the fullest.

Quick Change Halftime Act was at the forefront of the era of showcase halftimes in the NBA… and they are still going strong.