Amanda Greco and Tyler Ferraro lead a discussion looking at punchy clever sponsor triggers. We look at why they work and how to build them.

This Huddles’ Topic was quirky sponsor hit like a broken glass sound effect after a foul ball, repeating PA announcement trigger or sponsored audio clip for a Power Play. These quick in-game elements  provide valuable sponsor inventory without filling an inning-break or time out.

We look at examples and creating a powerful hook.  Guest panel includes the irrepressible Amanda Greco and Vegas Golden Knights Tyler Ferraro. This was a memorable hour discussion that included guest from the NHL, MILB, WWE, NBA, MLR and more. 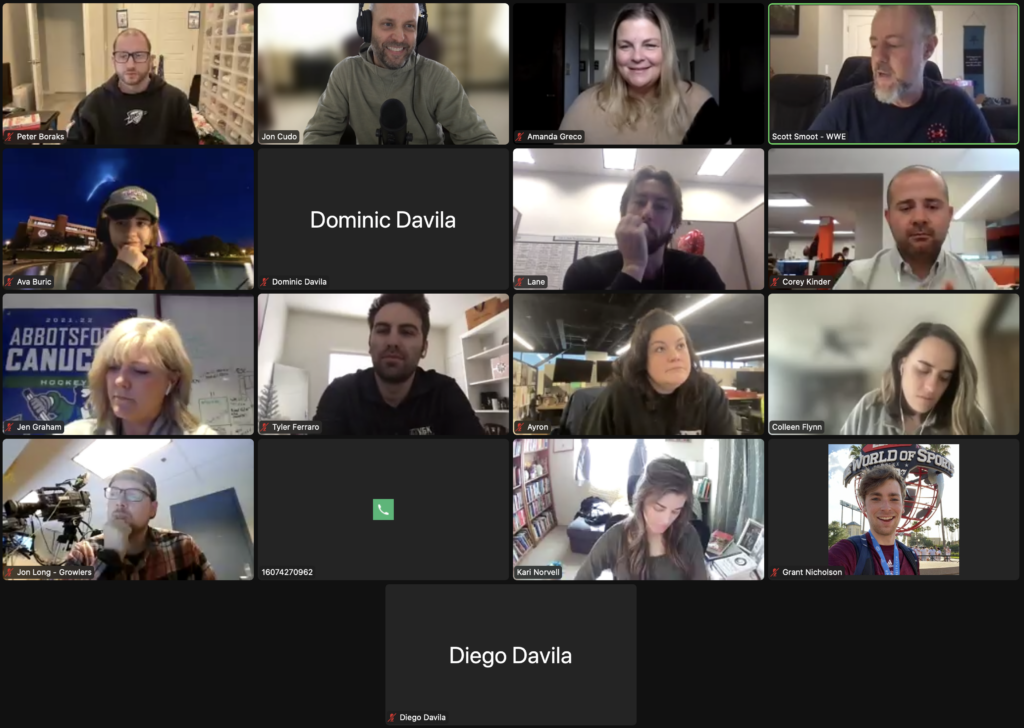 Tyler Ferraro of the Vegas Golden Knights and Henderson Silver Knights hockey teams cleverly identified the style of these triggers as a “Meme Mentality”, thinking in short punchy clever hooks.  He shared a fun (non-sponsored) meme they are using when pucks go into the stands as the team plays the popular internet audio clip “You are coming home with me.”

The discussion came back several times to the vital role audio plays in game presentation. Jen from Abbotsford noted how much she valued her audio tech and how integral they are to feeding fresh ideas into the game.  Kraken’s Jonny Greco also noted that audio is such an inexpensive tool compared to others.  WWE Live Event Producer Scott Smoot shared in his productions AUDIO is key. Nothing happens until audio goes. Audio leads and the rest follows.  Not only is audio cheap and easy, it is the likely the most important audience trigger cue.

During our Huddle call we talked about the following examples:

Tyler shared a great recent example of working and reworking promotions to find that clever twist that can take any execution from ‘eh’ to OUTSTANDING. In his example the VGK were giving away a lucky row of tickets.  Great examples like Tylers’s are an example the value spending an hour in a Huddle can bring.

After deconstructing these hooks and triggers our panel and group came to some conclusions:

Ayron from the Seattle Kraken also added an interesting term to the game operations lexicon. “Environmental Triggers”  These external forces, like a nearby train passing train can be used to trigger remarkable moments like the “Rally Train”.  This line of creativity peaked Austin Rugby’s game director Kari Norvell interest…. her team plays inside a racetrack!

Thanks to everyone who joined the call. Shout out to our excellent guests Tyler and Amanda for their insights.

Panther on the Hot Seat

Andrew Isaacson from The Famous Group joins the party. He talks about their new virtual fan solution Thunderdome created for WWE and how the pandemic pushed them to build a better virtual fan solution. Plus Rob Wicall on evolving mascot costumes, bubbles and a look at the best Water Cooler Moments in August.

The new Mighty Game Ops Network is up and running. Find out about our first call and the launch of this new Network on Gameops.com.