Defining and Owning your Brand with guest Greg Monaco from Fearless Brands. A great hour of insights, reflections and engaging conversation with executives from the NHL, NBA, Major League Rugby, NFL, MLS and Minor League Baseball.

Our First Huddle Call on the Mighty Game Ops Network is complete.  The topic was Defining and Owning your Brand with guest Greg Monaco from Fearless Brands.

It was a great hour of insights, reflections and engaging conversation with executives from the NHL, NBA, Major League Rugby, NFL, MLS and Minor League Baseball. 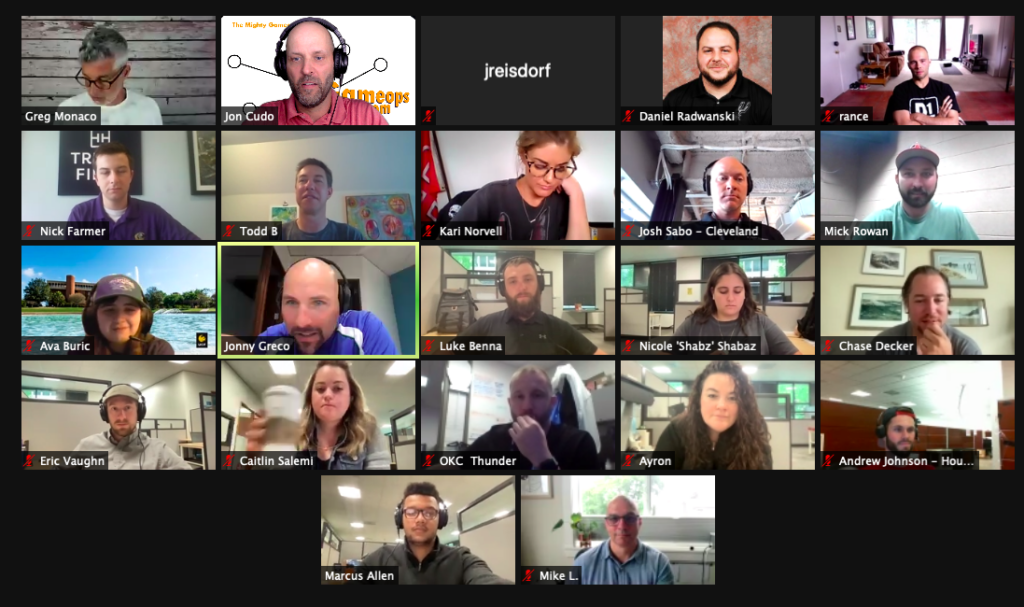 Greg illuminated the importance of branding to identify who you are, how that effect what you do and how it allows you to act with more thoughtfulness and design.

In addition to many people on the call sharing their experiences we looked at examples from the Philadelphia Sixers and from the the Tampa Bay Lighting.  This exchange includes part of that conversation on how knowing the team/shop brand helped the Lightning make thoughtful decisions about their video production.

Greg Monaco:  I love, I love your your input here Johnny and and the fact that you’re recognizing that there are different domains in the brand expression that need to be considered. So, for example a mascot needs to embody the voice of the brand in its own way but be complimentary to that, not at odds with it, just as you know the guy who plays music clips, you know they even represents the brand in a very particular way.

How is the mascot going to express that in a way that builds magnetism for the brand in the right way, and Jon has some examples of creating brand tolerances. What’s in an out, how do we make those decisions for what’s in a brand, and what’s off brand, what’s on brand and off brand, who makes those decisions.

Those should be very clear all the way down to the camera operator.

Cudo:  These as kind of statements define who you are, but almost more importantly how you will act or react.

A couple examples, I love this example because I’m a wrestling dork, but there’s a wrestling manager named Bobby Heenan who had this great branding statement or character statement.  It was “Wrestle like a manager, manage like a wrestler” and what that meant was, it defined exactly how we acted all the time in the ring out of the ring.

There’s a Spurs Coyote, who’s in the room with us today. He has kind of a brand statement saying the Coyote is “the coolest dork in the room”, and that defines who he is and how he reacts and acts to every situation.

He said that as they were spitballing ideas if one of the guys that hey, “why don’t we put a paper bag as the punch line, put a paper bag over one of the opposing teams fan fans faces”, which is a funny bit. But, but John Franzone said, we’re not about disrespecting the opposition.

That’s part of our brand tenants and we’re going to respect our opposition. Some teams will blow up the logo, but that’s just not who they are and that’s not what they do. So John put his foot down and said it’s funny and if I was watching at home I would laugh but in the context of the hockey game, not just for the fans but the media and the management are watching we need to make sure it matches the brand.

You tied up the whole bow correctly and that packaging makes sense. And if it’s going to make the hair on the back of your neck stand up your need to go “You know what, that’s not our brand, then you have to be protective of it”. So it’s the perfect little example of ”that one didn’t fit”.

That’s where you have to be careful so knowing your brand allows you to sort of make those micro decisions about what you’re doing in game whether it’s a video element or a mascot skit or what happened. So I think that illustrates why this is so important.

The highlight of call came out of a breakout session where we were working to define our brands with 1 or 2 adjectives.  A Spurs executive shared how the team strives to be true to the game of basketball and to the city. They use the Spanish word “puro“, which means pure, authentic and real, which really cuts through and present the brand in a meaningful way.

A note of appreciation for the Seattle Kraken who joined the call in full force with seven staffers in two with VP of Live Experience Jonny Greco.  The team has been focused on defining their brand and had great insights on the value of knowing who you want to be through your brand identity.  For members of the Mighty Game Ops Network we always welcome additional members of your team to join the Huddle calls.  The Austin Gilgronis also had a conference room with their staff to share in the call.

Huddles are weekly Zoom meeting with a wide range of topics. These directed conversation features an expert guest and open engagement for people in the game operations industry who want to grow and network with others.  Our next call is Wednesday July 14th at 1pm EST with Guest Todd Bosma from the Portland Trail Blazers.

Our topic is preparing contestants for success.  We will look at ways to make sure your next on-field contest has contestants who are ready to shine and make the most out of the moment.

You can join the call as Member of the Mighty Game Ops Network. We have a One Month Free Trail for everyone, you can sign up here.

Lara Smedley from My Fan Seats shifts from successful event business to pandemic cardboard fan cutouts with warp speed. We talk about the four ways cutouts are reshaping sports, plus creative ways teams are utilizing the cutouts. Plus Simon Sez Steve Max and Amanda Greco.