This Huddle call discussed the powerful use of music to enhance and build your teams brand, along with strengthen you connection to your fans and market.

A great Huddle Call today lead by the two NBA teams in LA. We discussed how the team differentiate themselves through the power of music. Guests included Andy Kinzel, DJ Roueche (Jeremy Roueche) and Joel Jacobson.

We started with both teams sharing how their brands are reflected in the style and artists they use in-game. The Clippers focused on old school West Coast like Dr. Dre to connect their brand to a grittier LA vibe, while the Lakers focus more on hip hop to tap into their brand.

We got tremendous input from the group, including the Detroit Pistons who shared several examples of how they use local artists for their presentation.

Our network of game operations pros included a big group from Major League Rugby, the NHL, college and the NBA. 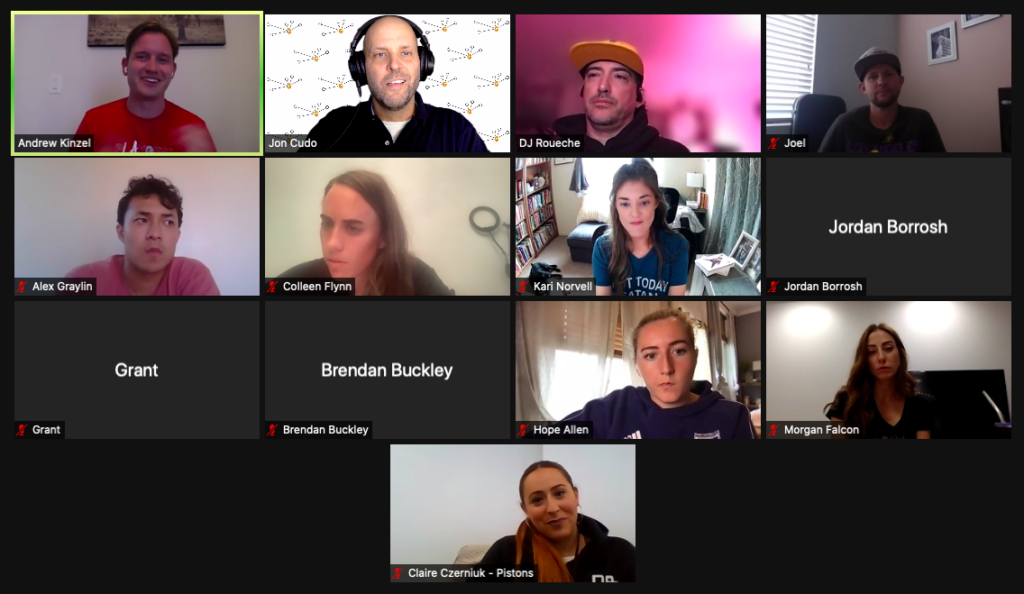 The full call video is available on Gameops.com Plus for our members.

Here is a quick clip from the call with some insight on how the Pistons are planning music around social media moments to keep the video clear of copyright infringements.

Cudo:  Claire, how are you managing the use of copyrighted music related to social media?

Claire Czerniuk (Pistons):  Yeah. I mean, it’s kind of a nightmare, but some teams are being forced to play only those tracks. But here in Detroit, we’re definitely identifying those moments that the social team would like to post ahead of the game so that we can flag them. And in rehearsal mentioned to our DJ. Like, okay, let’s make sure we pull a (royalty-free) track for this again. The library is more limited when we’re doing that, but it helps us with background noise.

So a good example is at halftime in one of our preseason games we did and naturalization ceremony. And part of that intro and outro obviously had music. As we were setting it up. We nobody told us that we should do this, but we already knew to do this because it was such a high profile event that it would get shared to different outlets. We played a track that was sort of just like a walk on APM. It was boring, but it was background, and that clip didn’t make it onto social, but we were okay because we thought ahead of it.

So where we can we’re trying to identify those moments. But the only thing that we can control is those more viral moments of something really funny happens in a dance cam. Things like that. We don’t want to be playing those tracks to those moments. So that’s where they need to know to take the track off before they send it out in the control room, so it doesn’t get anywhere. But yeah. So we’re just trying to identify those moments and anticipate them a little bit for everybody to help everybody and put that in the rundown.

Cudo:  So that’s a really great insight. I love that kind of tagging and flagging those moments ahead of the game. So, you know, insert those.

I know, in WWE when we would do in live events, when the social media team is in the back doing, like, a talent interview, they would actually come out to us and be like, “hey, can you change your music.” So we would change from walk-in music (covered by ASCAP or BMI)  that was playing for the in-house crowd because those songs could get picked on the social post. It’s like faint in the background, but their robots picked that up and then you get dinged on all those things.

So I like that working in advance, working ahead of time, knowing, hey, these are moments that our social team wants, and it’s going to need to be clear.

Also note, I didn’t catch the name of this, but in this discussion in the last week. There are services now that have essentially it can fade out or mute out music in the background of clips. So if you did have something like you said, a great moment that was happening on the court in a dance camp, they can actually either. Obviously, you can put music over the top of it, but I can actually pull tracks out of the background, which is kind of interesting.

I think this will be a really ripe space for for tools out there in the marketplace to correct some of these things. As this gets more and more tight and finicky.

Calendar Has Been Marked

Big theme night from the Martin Show served up by the Pistons reminds Detroit Wazzup.