Teams across the country are playing it safe by replacing fans with COVID-free cardboard cutouts of fans.  And the Philadelphia Phillies are doing it a cut above everyone else.

Teams across the country are playing it safe by replacing fans with COVID-free cardboard cutouts of fans.  And the Philadelphia Phillies are doing it a cut above everyone else.

Most teams have found these cutouts to be a nice source of revenue, often to help raise money for team charities.  The website Stadium Journey has a great list of about a dozen teams and their efforts.

For example, the Phillies:

Citizens Bank Park – The Phillies charge $25 for season ticket holders and $40 for the general public. Everyone purchasing a cutout receives a photo of the Phillie Phanatic sitting next to their likeness. Proceeds from the program go to Phillies Charities.

But the Phillies aren’t stopping there.

They also have an interactive 360 degree camera allowing fans to zoom in and find their cutout in the stadium. They can clip a photo and share on social media, making every cutout come to life on-line. 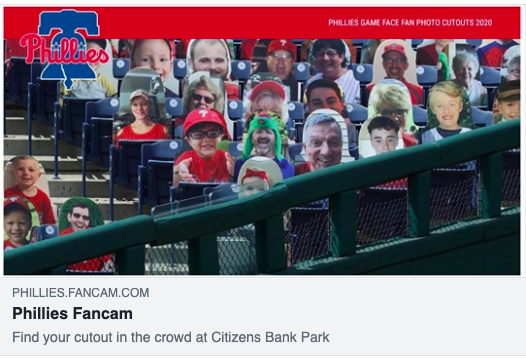 The Phillies even treated special fans to the best seats in the house. (from Fansided)

The Phillies are honoring healthcare heroes with cardboard cutouts
When the Philadelphia Phillies take on the Miami Marlins on Friday to kick off their 60-game sprint, healthcare heroes will go from being on the front lines, to having their “game face” prominently displayed as part of the Opening Day “crowd” at Citizens Bank Park.

On Wednesday, the Phillies announced that they will honor area healthcare heroes by displaying cardboard cutouts of them, dressed in hospital uniforms and/or baseball gear, directly behind home plate in the Diamond Club.

It's only fitting that local healthcare heroes have the best seats in the house for Nemours Opening Day.

Stay tuned to learn how you can join them this season: https://t.co/pJtPlt6CfG pic.twitter.com/xtXmOHx5Gp

And of course if it is Philly, Gritty and the Phanatic are in there somewhere.

Check here for more Mascot Tips from the Phanatic here:

Everybody get up, it’s time to slam now…