Interview with Tampa Bay Lightning’s John Franzone. John talks about staying on brand with your show, cowbells and much more.

Cudo: Our guest is John Franzone from the Tampa Bay Lightning.  Today is inspired by minor-league baseball as fun and in reverent ever-growing theme nights, which now seemed to have shifted into minor-league hockey and a little bit into professional hockey at the NHL level and teams are embracing these more and more each year. So, joining me to talk about that is the Vice President of Game Presentation from The Tampa Bay Lightning, John Franzone. I went out looking for a hockey guy recently in John’s name came popping up, which was funny, since I knew a baseball guy from around 2006 when he was a Director for the Tampa Bay Rays.

You can read about the visit from Gameops.com in our archives at Six from Six series. But baseball or hockey, John Franzone is a game ops guy first and foremost and it’s great to have you with us today, John.

Franzone: Happy to be here. Good to talk to you again.

Cudo: I will also note that you’re a Vice President, which I kind of take special joy in seeing that because I’m old enough to have worked in this industry and when that I worked for an NBA team, I didn’t even have a Game Director, let alone someone who was at a VP level. So the industry as matured and people like you are rising to a VP role and that shows the huge impact game operations can have to a team’s success. Do you want to touch on that a little bit on how the ownership sees the game operations department there in Tampa?

Franzone: Yeah, absolutely. I am so fortunate to work for probably in my opinion the best owner in sports, Mr. Jeff Vinik, but our CEO, Mr. Tod Leiweke and COO, Mr. Steve Griggs; they make no bones about it. And one of the lines I use as my sort of daily mantra, Mr. Leiweke basically told me in an early meeting here when the new ownership came on board in 2010; he said that game presentation is the ultimate manifestation of your brand.

I think what he meant by that is that you can do all the snazzy marketing and you can try every trick in the book or every means to get fans in the seats but if that glue doesn’t stick because your game presentation is off, then it’s all for naught.

So I like a liken to us, my group, my production team here is sort of the last line of defense, if you wil, and we try to protect our brand, we try to enhance it, raise it and we do that through a lot of almost what you would call non-traditional hockey programming because we don’t do a lot of the in-your-face blood sport attack that some other teams might do.

We are more in the realm of saluting and celebrating the game, saluting and celebrating our community and the achievements within our community to really instill in our fans a sense of pride. So by linking that to that Lightning logo creates a very cohesive experience that frankly it’s an honor to work in that realm and embrace it and fostered it. We really had a lot of success with it which has been great.

Cudo: That’s great. I actually love and I’m writing down all these notes as you talk you talk here. But I love the fact that you can exactly pinpoint what you’re trying to do, which is salute and celebrate and build all those community achievements. I think that’s such a key and I think a lot of teams sort of loosely go with, ‘Oh, we’re just trying to have fun.’ But I love when you can really solidify what you’re trying to do, because again, it makes your day-to-day decisions much easier.

Franzone: Well sure. You know it’s great and it took a little getting used to because typically like you said Game Ops is always on that island. It always was and may still be for some franchises and organizations, but just sort of those weird guys and they’re out there and do kooky stuff. But then once that one bad camera shot goes up there and once that one bad misspelled player name goes up and once that one bad judgment and good taste goes up on the screen or musically or whatever that is, it reflects back on the ownership and reflects back on your organization.

And even in the spirit of it is well-intentioned, it can still blowup. So you have to really make sure that your priorities, your programming and your choices line up with what your brand stands for.

It’s not something you just flick a switch on; it took us a while in my group to sort of say, ‘Yeah, that’s on brand.’ or ‘Yeah, that’s not.’ or ‘Yeah, that shot works.’ We try to position ourselves and it sounds haughty, if you will. It’s the first time you ever use the word haughty here.

It sounds a little too nose in the air but it’s not. We shoot for a world-class experience and by that it ties back to the brand in the sense of being proud and the sense of being elegant, which is a word you’ll almost hardly ever hear in the in the annals of hockey presentation. We aim to be elegant, emotional, evocative and as such use those as sort of worms on the hook, if you will, to your fan base to engage them, to inspire them and that’s pretty lofty when you’re coming from a world of bloopers and Kiss Cams.

So it took us a couple of years to kind of shift your gears and I’m not trying to rhyme of purpose here. But to get your crew to sort of understand and start to think that, yes, that’s on brand, yes, that’s the shot to use and it has to translate all the way down your camera guys to make sure that yes, I’m going to shoot this fan instead of one because this one fits our brand more and then that signal gets up to the control room and in the switcher looks at it and goes, ‘Yeah, we should put that guy up there.’  Then the director looks at it and goes, ‘Yeah, all right.’

So it’s passing through levels of sort of sort filters where we make sure we’re on brand and I’ll just use that as an example once you take a little fan shot. But we try to apply that logic to all the graphics we make. Is this is consistent with what you see on a billboard or a print ad and the language too, are we using the same word? 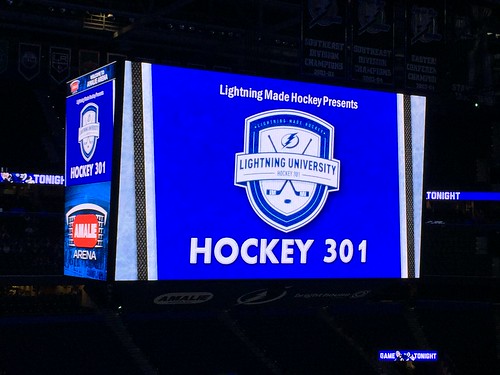 We try to really make sure that even down on the clinical level like that it fits and it it’s something we have to regiment you and your crew to do because your first instinct is we’re all show men and we’re all showoffs and we have all got big egos. It doesn’t matter what sport working on if you have presentation attached your title. So our first instinct, that gut instinct is to do something that’s, ‘Hey, look at me and it’s almost a mascot instinct.’ or ‘Hey, put that shot up because this guy is sleeping and we’re in the seventh-inning. Come on, put it up.’ So you have to almost train yourself to sort of think twice and then act once in the sense of how you need to represent your organization and your community because we’ve look outside our walls here in the sense of how our game presentation links back to all the sort of philanthropic things an owner does to a great degree in our community.

I don’t know if that answers your question or confounds you further, but that’s kind of our mindset in the sense of how we produce here.

Cudo: Can’t it be both?  Answers my question and its confuses me (laughs).

The evolving Benny the Bull.

Confetti can be a valuable tool for mascot, event operations and game entertainment professionals. This month we review how some teams are utilizing handheld launchers to enhance their presentations.