Our “High Five” series looks at five stand out elements from a live game review around the country, along with assorted features and notes from our on-site visit.  This game review was done by Editor Jon Cudo. 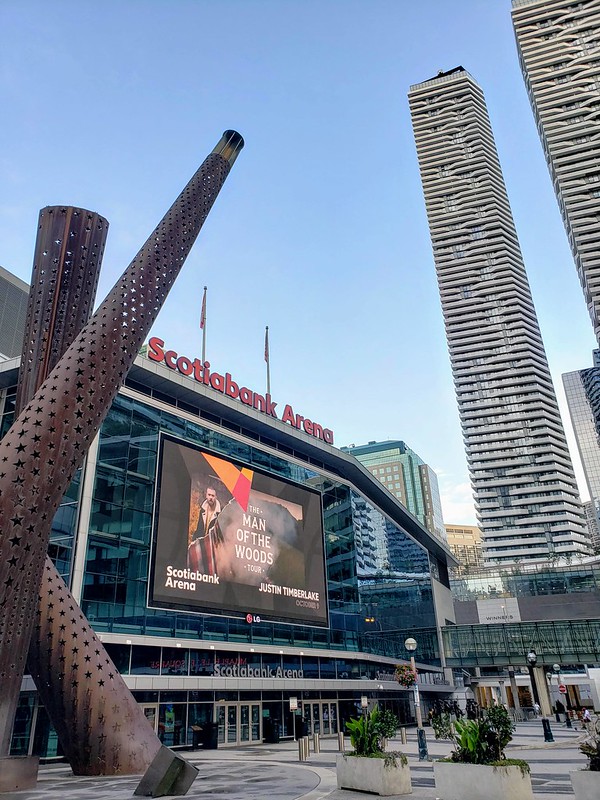 The Toronto Raptors play in ScotiaBank Arena in downtown Toronto. The team is part of Maple Leaf Sports & Entertainment (MLSE) which owns and operates 7 franchises across several sports.

The primary holdings of the company are its major sports franchises, the Toronto Maple Leafs of the National Hockey League, Toronto Raptors of the National Basketball Association, Toronto Argonauts of the Canadian Football League, and Toronto FC of Major League Soccer, as well as their minor league farm teams, the Toronto Marlies of the American Hockey League (AHL), Raptors 905 of the NBA G League and Toronto FC II of the MLS Next Pro, respectively. (wikipedia)

These connected teams have provided them with a massive platform across sports to build a network of entertainment making all of their show better.  Like players in minor league development the team uses its franchises in the AHL and G-League to hone the skills of on-court hosts and performers to be ready for the bigger stages provides by the NHL, MLS and NBA teams.

The production is led by Anton Wright the Director & Executive Producer of Game Presentation and Events at MLSE. Anton’s career with MLSE spans 20 years touching all levels of their production across all the sports properties.  Raptor entertainment includes the North Side Crew, Lil Ballas and The Raptor mascot.

This game review is from April 2022 as the Raptors approach the 2022 NBA post-season.  The team still operates under stricter COVID-protocols than most arenas in the US, like mandatory masks in the building. This season marked their return after spending a year in Tampa due to Canadian travel restrictions and COVID-related crowd limits.

Here are our five highlights from the Toronto Raptors game:

I’ve attended a half dozen Raptors games in the last 10 years. Every time I am struck by the music. First the sound quality is rich, full and clear.  But more notably the cuts feel fresh. Music drives the energy in the building. And the music makes every time out feel stronger.

The DJ is 4Korners who was named Canadian DJ of the Year and has been the official DJ for the Toronto Raptors since 2005.

When the team brings the the ball up the court there is a stunning variety of beds and bumpers.  These beds are cut with care. While almost all are recognizable riffs and beats, most feel like a remixed dance version edit. This gives even background beats a rare freshness and energy.

Late in the game 4Korners completely takes over time outs. While the game was hot, the music added a huge spark to the crowd. Late game time outs had a club atmosphere with fans just dancing in their rows, triggered by the elite sounds.

In the end I just think the Raptors arena music is the best I have even heard. Every moment feels bigger and moves with more energy, and it starts with the music.

A post shared by 4KORNERS of the World ⚡️ (@4korners)

Here’s more from 4Korners, including his favorite five songs to drop at Raptor Games.

MLSE has a half dozen teams across sports, which provides them with an opportunity to grow a wide range of performance talent.  It was clear this was an important part of the management of all the entertainers.  This has a positive effect on the show, improves the skills of the talent and aids in replenishing people and providing new opportunities for performers.

“The growth and development of people is the highest calling of leadership.”
– Harvey S. Firestone, founder of Firestone Tire & Rubber Company

Growing your talent helps retain and enhance their experience allowing people to not only feel valued, but become more valuable.  MLSE really drives that philosophy home with repeated examples.

Raptors’ current host Mariah has an excellent command of the crowd.  This comes from being well coached and produced on Raptor game days, but is rooted in her experience with the Raptor 905 G-League team.  Mariah started as Raptors dancer, trained as host with the G-League Team and now has stepped into the role as Raptor host.  The Raptor’s investment in her talent along the way kept her engaged and improving along her journey.

Here is some great insight into her path and how the experience has helped make her a stronger host.  While Mariah may have aspirations beyond the Raptors they invest in her knowing their show will be stronger as she continues to grow.  While opportunities outside MLSE may eventually lure her away, the team is grooming talent to fill her shoes in that case.

The host isn’t the only role they grow talent. MLSE cross-promotes mascots, dancers and entertainers at all levels.

I was also impressed with the green light performers felt to try new things and experiment.

In one corner of the arena I found this entertainer working the crowd with some “follow me” dance moves during hot time outs.  He’d set a move and the crowd would follow. It was a small injection of fun for his section that fans enjoyed.

I asked how long that was part of the show and I was told he was just trying it tonight. Allowing performers to perform and experiment can have great results.  It also inspires the performer to “shoot their shot”, gain from that immediate feedback and build their repertoire of interactions. 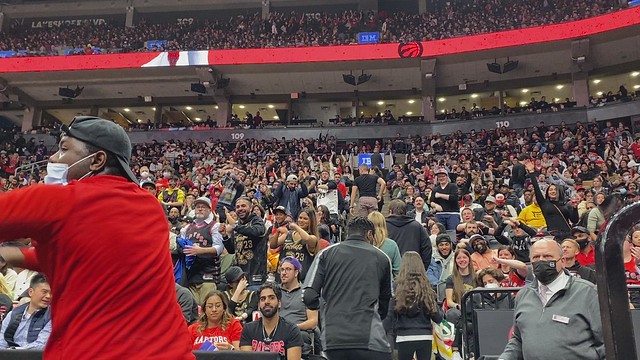 MLSE does an excellent job building their network of performers, investing in the them and giving them freedom to perform.  Their show was clearly elevated by this effort.

Between the Fur: Scott Hastings

May 2022 Party in the Back Podcast

Swamp Rabbits find excellence in their executions of a special fan section.

How the Kawhi Trade Fed a Nation.