High Five is a game review series from Gameops.com. Game review from the Cleveland Indians in June 2021. We looked at five ways the Tribe created memorable live event experiences for their fans.

Our “High Five” series looks at five stand out elements from a live team reviews around the country, along with assorted features and notes from our on-site visit.  This game review was done by Editor Jon Cudo.

The Cleveland Indians hosted the Baltimore Oriole at Progressive Field on Wednesday June 16th, 2021.  It was a beautiful night for baseball, sunny and clear temperatures in the mid-70’s. The team is transitioning to no restrictions from the pandemic; Social distancing is relaxed, no restrictions on seating and masks are optional for those who are vaccinated.

This game had no promotion or theme applied. Various Fan Cams were used all game, keeping fans engaged and making them the stars of the show. Very entertaining live event that struck the right balance of fan-engaging elements but never felt overwhelming or overly busy.

Despite the large stadium, it felt like cameras were everywhere picking up fans and interesting crowd shots.  Director of Live Entertainment Kelly Dredge noted the team uses 3 to 5 cameras on most nights, but the active camera operators made it feel like cameras were all over.

Game night staff is big and active, making a large impression on the live experience. These entertainers include:

The team uses ShoFlo to build their game script.

Here are our five highlights from the game in downtown Cleveland.

1. Video Welcomes Fans Back from Pandemic

The pandemic changed everything in sports for 15 months. Now that we are back it feels essential to share why being together is important.

What we missed, why it feels so good and how the communal experience is so beneficial.

The Indians created a video to do all of those things. They tugged on the emotion of the moment and showed gratitude.

This video aired following the National Anthem and Umpire introductions.

Really strong video and messaging. Perfect for the moment.

Centerpiece of the show, feels like a grand spectacle. The Sugardale Hot Dog Derby is a Live Race occurring each game at the end of the fifth inning. The three hot dogs emerge from the left field wall and race around to the right field corner. The race is lightly scripted and sometimes episodic from previous games. Slider is involved in the production, typically at the finish line declaring a winner or involved in the comedic ending.

In the half inning before prior the make an announcement “Here it comes… the Hot Dog Derby is Next Inning”. This alert lets fans know the race is next and also is a call-to-action to vote on the app. These pre-race elements make the race feel important. The app voting was fairly simple, just three text options on the winner and a notification if you were right.

The race is part of the Indians partnership with Sugardale Hot Dogs. Since its inception the race has grown in popularity and elevated the Hot Dogs to mascot-like celebrities in the area.

I triple Hot Dog dare you to run A Christmas Story 5k! There was a giant RED nightmare & only one Hot Dog got their tungue stuck on a pole! 👅❄ pic.twitter.com/lTazi1LqTA

The teams mobile marketing van even hosts photos of the hot dogs with mascot Slider.

Getting things fired up at the @CleFoodBank Harvest for Hunger event this morning. Oh, and great triple parking job @SliderTheMascot. pic.twitter.com/d7DjoCflyi

The additional popular characters also allow the team to reach fans all across the huge Progressive Field Stadium (details in the next High Five point).

And here’s the meat of the promotion. 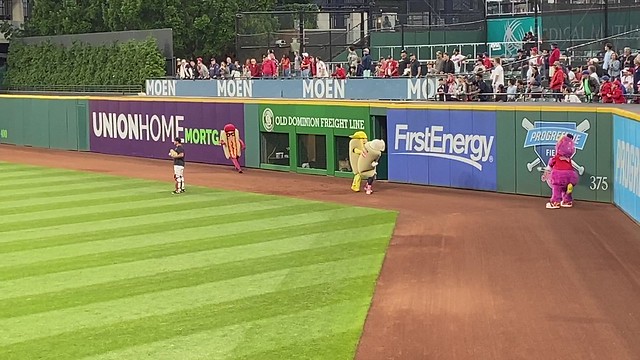 The promotion continues to grow, next year there is even a custom “Finish Line Experience” for fans connected to the race.

Who do you root for during the Sugardale Hot Dog Race? Ketchup, Mustard, or Onion? Tell us which mascot you cheer for and why for the chance to hold the finish line at an @indians game next season! https://t.co/3asll8a1Jz pic.twitter.com/H9OwFbwMfs

The Strikers, Hot Dogs and Mascot give the Indians a lot of people power to cover the expansive Progressive Field. The Director of Live Entertainment Kelly Dredge plots out directions for each group to active various elements before and during the game. This thoughtful plan creates so many opportunities for fans to interact with some part of their show during the night. 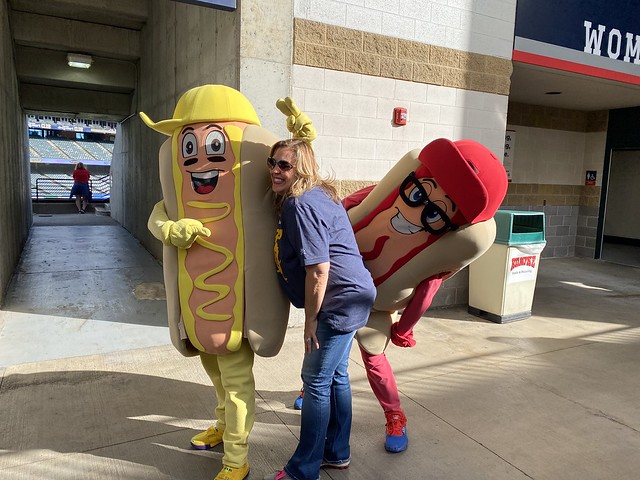 Pre-game all performers work the entrances and roam between gates greeting fans and taking photos. With four costumed characters and about a dozen interactive performers the chance for fans to bump into someone is pretty high. All game these performers are slotted to be in locations around the ballpark, usually planned and plotted for maximum exposure. Often game night entertainers (even a lot of them) can get lost doing their own thing from the time doors open until the game ends. Taking the extra step to plan their movements and direct their attentions is time well spent and has a big impact on the number of fan interactions they generate. 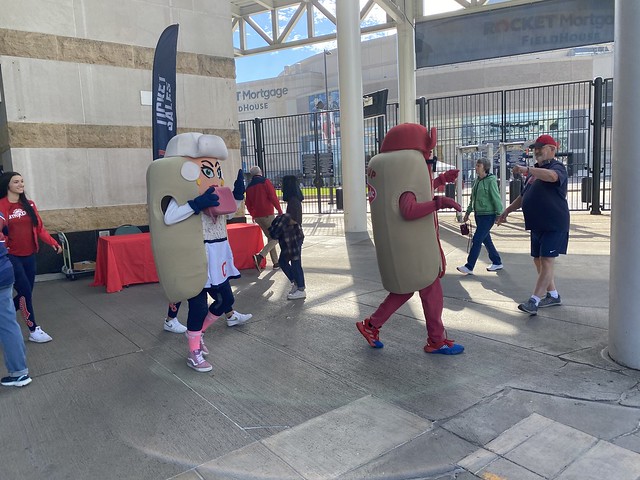 Even the entrances and exits from staged promotions provide interactive points. Following the Hot Dog Derby all the characters flow out of the right field corner into the stands and walk through the concourse crowds. Before and after dugout shirt tosses, the performers are staged up along the concourse and use the time for countless interactions and photo ops. 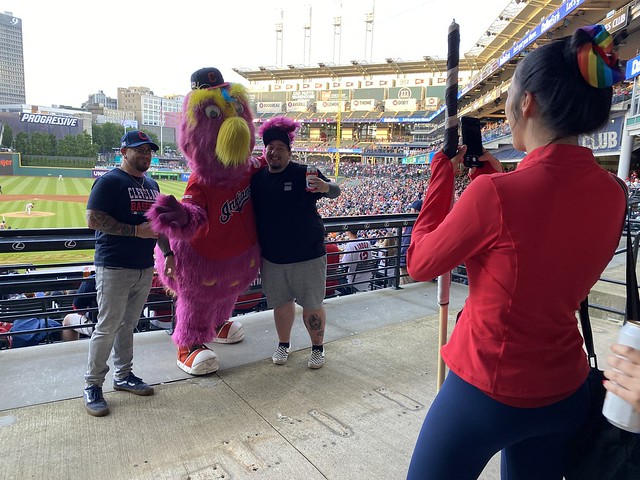 This combination of numerous entertainers and a thoughtful plan of action creates hundreds of connection points for fans.

Behind the scenes look at a blossoming tradition at Wrigley.

Chalk Up another experience for fans in Charleston.