Three hockey teams toss it back to the 90’s in style and things get kinda radical in a hurry.

The 90’s are hot lately as a throwback promotional night and it’s more fun than a pillow fight (according to the Hamilton Bulldogs). Here is a look at three teams tossing it back to much more radical times.

More fun than a pillow fight!

Last year the Ottawa 67s tossed it back to the 90’s highlighted by these Top 5 Reasons to Come to the ‘Totally 90’s’ Game!

1. In Game Trivia
We’re bringing back a fan favorite intermission entertainment activity – trivia! All you need to have is a phone and you can play from anywhere in The Arena! What will the trivia be about you ask? First intermission will be about the 90’s and second will focus on this year’s rendition of the 67’s.

2. 90’s Music
Brush up on your Carleton dance! We’ll be playing 90’s tunes all game long. What surface is hockey played on? Ice Ice Baby.

3. 90’s Dress Up Contest
Wear your best 90’s gear! We want to see all the scrunchies, Dr. Martens, overalls and more! Post a photo of you at the game in your 90’s clothes with the hashtag #67s90s and the most 90’s fan will be featured on our account!

4. 90’s Menu Items
When you look up at our menu’s to order food you’ll see some totally radical items available for purchase such as the exclusive ‘Salt-N-Pepa Pretzel Bites’.

5. Post Game Skate ft. Riley the Raccoon!
After the game ends you’ll be able to come down and skate on the same ice the players will have just played on! Everybody’s favorite Raccoon Riley will also be on the ice with you! Don’t worry about lugging your skates around during the game either! You can check your skates in at Guest Relations next to section 18 and pick them up after the game!

Finally the NHL LA Kings bring it back with a big night of Entertainment. 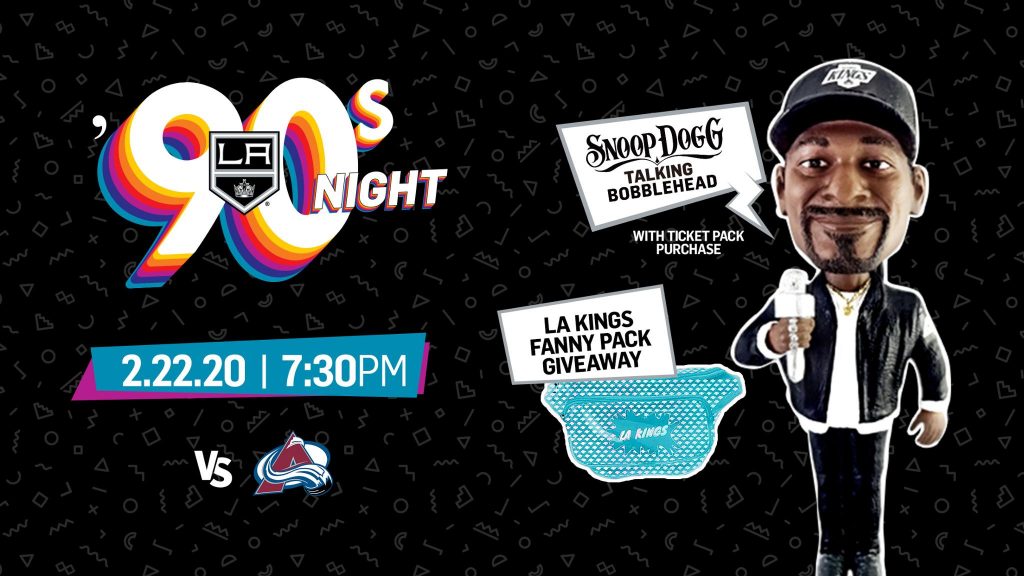