It starts with a moving anthem by Trevor Strader, son of Dave Strader. Trevor is an active actor, singer and writer working out of New York City, and has appeared in productions such as A Man of No Importance and Nate the Great. Dave Strader his father broadcaster for the Adirondack Red Wings and is the namesake of the Dave Strader Press Box at the Arena. Dave Strader passed away on October 1, 2017 after a battle with a rare form of bile duct cancer.

After the game Friday fans can Paint The Ice night, presented by Colorize. Fans who donate $10 to the C.R. Wood Cancer Center at Glens Falls Hospital will be eligible to paint a message on the ice to a loved one affected by cancer. The messages will be iced over throughout the night and the Thunder and Monarchs will skate on the painted ice for Saturday game. 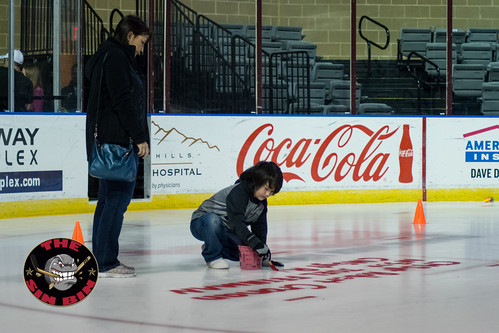 The Thunder wear purple, cancer-themed jerseys both games this weekend. After Saturday’s contest, the sweaters will be auctioned off via live auction on the ice, with all proceeds benefiting the C.R. Wood Cancer Center at Glens Falls Hospital.

Looks like a great weekend with the Thunder in this thoughtful promotion.

NEWS – THUNDER READY FOR STICK IT TO CANCER WEEKEND AT COOL INSURING ARENA!

We've got an electric national anthem from @tstrader4, Paint The Ice Night and a jersey auction benefiting the C.R. Wood Cancer Center at @GlensFallsHosp!

Follow-through on the Toss.

Slappy’s reading club not only encourages reading…it pulls in fans. Read all about it.