Host Kenn Solomon talks to Felisa Isreal. She was the one-time game director for the Phoenix Suns and Mercury, plus a bonus from the Gameops.com archives.

Host Kenn Solomon talks to Felisa Isreal. She was the one-time game director for the Phoenix Suns and Mercury.  Felisa has some epic tales from her days in Phoenix, including when some Gorilla hi-jinx nearly got her fired.  Felisa is also the former Live Programming & Entertainment Director for the NBA and is now the CEO of IMPACT Internship!  Check out her site:  (Courses are available online or in-person).

In 1999 Felisa was with the Phoenix Suns and Mercury.  She was the very first “interview” we did on Gameops.com, then just called “5 Questions”.  Our original interview had been taken down in the new site makeover, but found the text and reprinted here.

Five Questions with Felisa Israel of the Phoenix Suns and Mercury

Gameops.com: Talk about what you do at every Mercury game.

Felisa Israel: The fans really enjoy our Hip Hop Squad. They have become a very popular entertainment element for The Phoenix Mercury. This co-ed team of 15 performs a variety of routines at every game. Because the fans love them as much as they do, we incorporate them into helping with the execution of contests and sponsor promotions as well.

One of our most well liked promotions is the Bud Light Party Zone. A banner is dropped with an arrow pointing out the section to the entire arena and EVERYONE, from the Hip Hop squad to the ball kids creates a party for that particular section by dancing, throwing shirts, confetti and prizes to the fans.

We have also made an effort to integrate celebrities into the game whenever possible. Last season CeCe Penniston (“Finally”) and Otis Day (“Shout”) performed live at our games. Cheryl Miller (Head Coach) plays a big role when it comes to our energetic presentation. She makes a post game motivational speech after every game, and the entire crowd stays to listen to her.

We created a mascot character “Galaxy” for the first year. Because of the overwhelming energy that was produced during the first year of the Phoenix Mercury, Galaxy was not as effective as we would have liked her to have been. There was enough excitement created by Cheryl and the Hip Hop Squad, there wasn’t a need for a mascot!

Gameops.com: How easy or difficult is the transition from the Mercury to the Suns?

Felisa Israel: Last year I had mixed feelings. I love the energy of the WNBA. There are clearly two different crowds with a different set of expectations. This year, because Bud Light was so happy with the success of the Bud Light Party Zone at the Mercury games, we will be incorporating that particular promotion into the Sun’s games along with attempting to create more of the interactive type Mercury atmosphere. 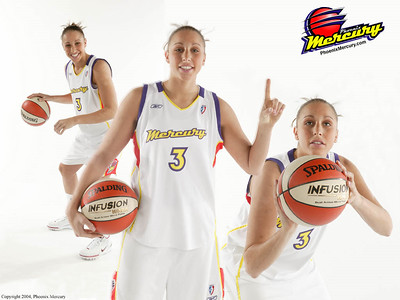 Felisa Israel: The biggest addition will be the US West Zoo Crew (designed by The Phoenix Suns & Sports Magic/Orlando). This is our new interactive team that will perform during the game as well playing with the fans. They will provide additional entertainment during our pre-game festivities on the plaza at the America West Arena as well. They will be known as the Gorilla’s buddies and will work often with him.

Gameops.com: Will the Suns put more emphasis on game entertainment after the PR mess the lockout seems to have been?

Felisa Israel: I had planned to focus more on entertainment independent of the lockout. My personal focus is on interactive entertainment. That is the key to success in my opinion. The more you bring the fans into the game and the more they feel a part of what’s happening, then you are bound to be successful.

Gameops.com: Since Cheryl Miller is known for her post game victory dance, any chance you are working with Danny Ainge on some moves?

Gameops.com: What are your end goals in game operations?

Felisa Israel: My ultimate goal is for our fans to walk away, whether we win or lose, saying to themselves, “Wow, that was a lot of fun!”

Special thanks to Felisa Israel and the Suns and Mercury.

Update: Felisa has left the Suns and Mercury to work in New York for the NBA/WNBA league office.

Between the Fur Podcast:

Kenn Solomon is a mascot in the NBA speaking to past and present professional mascots from around the league and other pro sports. This series reveals our bizarre, funny, and inspirational stories from behind the mask and gives an exclusive insight on what it’s like behind the scenes and between the fur.

Blazers got their groovy on with a 70’s night tribute in November.