The Best of 2021 Awards. COVID changed the way teams present game entertainment and these winners have adjusted and excelled.

“The Beat the Freeze is just the most perfect promotion,” raved one panelist. “Every race is unique, you never know what will happen. It has excitement, intrigue, leaves everyone in the stands thinking that they could do it.”

For the fourth time in five years the Atlanta Braves’ superhero The Freeze raced past the competition to win the best contest of the year. A fan who beats the masked sprinter Nigel Talton may win $100 gift card, but it is Braves’ fans who always win seeing this spectacle race on the warning track.

The Freeze is even taking on runners when the Braves aren’t playing, like this news-making segment with former NFL receiver Chad Ochocinco.

.@ochocinco really raced The Freeze from the Braves games 😂

The new season of Bet$ Friend$ is here @br_betting pic.twitter.com/dYlbzvITw9

The Freeze just keeps on winning.

The Battle has been WON! 🏆 ⚾️ Congrats to our Atlanta @Braves @mlb #BattleATL #WhateverGetsYouGoing pic.twitter.com/PnBaZlm5Eo

Listen to the Best of 2021 Audio Round Table discussing all the categories and winners with out panel of Jon Cudo, Amanda Greco, Chris Grosse and Benjamin Hill. – December 2021 Party in the Back Podcast

One Hockey Team Executive raved “Gritty is just without peers right now in terms of mascot performance, presence, and following. The King of Social Media.”

Gritty is indeed everywhere and his star hasn’t faded since he launched in 2018.  Instant meme, leftist avatar and the soul of Philadelphia this orange nightmare is the mascot you never knew you needed.

The team has done an excellent job keeping Gritty at the center of its in-arena show and Gritty’s work on social media is unmatched. One industry journalist called Gritty “A near perfect mascot in the social-media age.”

He has his own 5k Race, is a featured attraction for affiliate nights and has taken over as the mascot world’s most notable cake tosser on his way to being named the Best Mascot of 2021.

Tommy Hawk used the COVID-era to create a pre-game ritual with Hawks star Patrick Kane.  His on-going quest to catch a puck in his second-deck perch became an episodic hit on social media, culminating with him eventually snaring a puck in this celebrated moment.  Tommy also was one half of the big Chicago Mascot Swap that benefited both teams and showcased his two-sport chops.

Several panelists noted Slugger the SeaDog’s charm and active social media efforts.  The MILB standout gets the most out of his skit work by posting the hits and misses. “You miss 100% of the shots you don’t take,” noted a panelist who admired Sluggers willingness to put himself out there.  Fans embrace the journey and his lovable antics are all part of his award-winning persona. 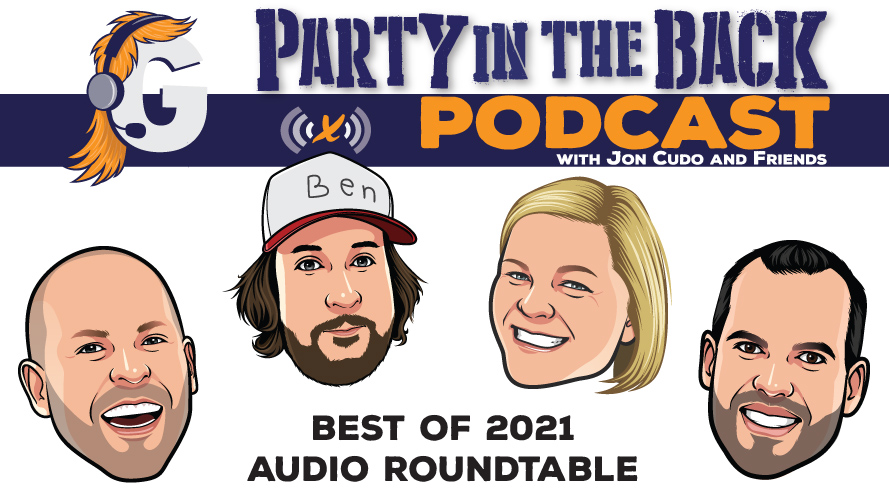 December 2021 Party in the Back Podcast

Cameron Hughes and Kenn Solomon join the Party. Cameron gives a performer’s perspective on a Joe DiMaggio quote in the news and Kenn shares insight into his Podcast called “Between the Fur”.