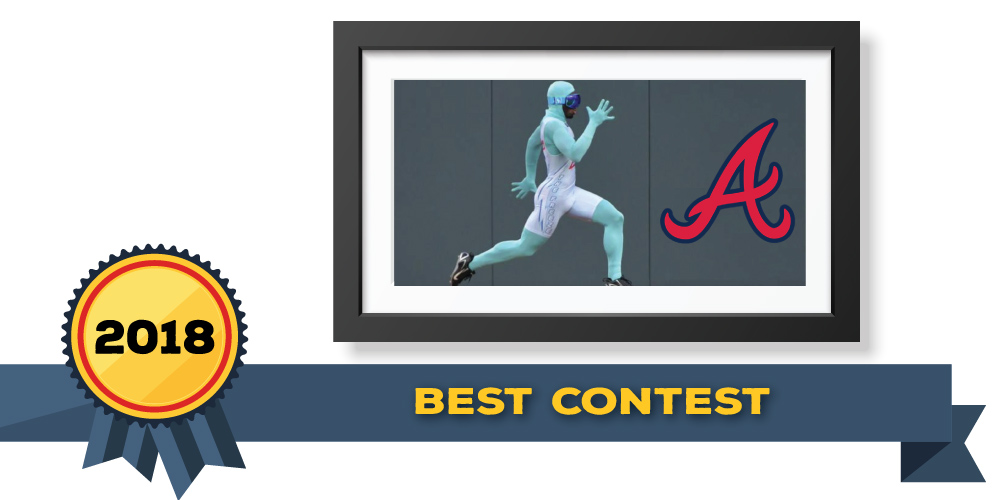 Last year’s run-away winner outpaced the competition again this year in Atlanta.  Aspiring Track Star Nidel Talton’s masked Super Hero act continues to entertain the masses in Atlanta and across the country.  After giving his foes a healthy head start the Freeze bolts to the finish line dusting nearly everyone along the way.    A lot of copy-cat promotions popped up this, but none capture the flair of the Freeze.

On savvy panelist explained “(The Freeze is) Head and shoulders above the other nominations. The Freeze became a huge star in their show, locally, and garnered national attention. Other teams across all leagues are now trying to replicate the success of this in hopes of getting the same attention that The Freeze gained.”

“Beat the Freeze got nation attention and was the promotion of the year,” yet one team executive reminded us this might not even be the best promotion in Atlanta with the NBA Hawks great “Handles Like Hot Sauce” promotion. 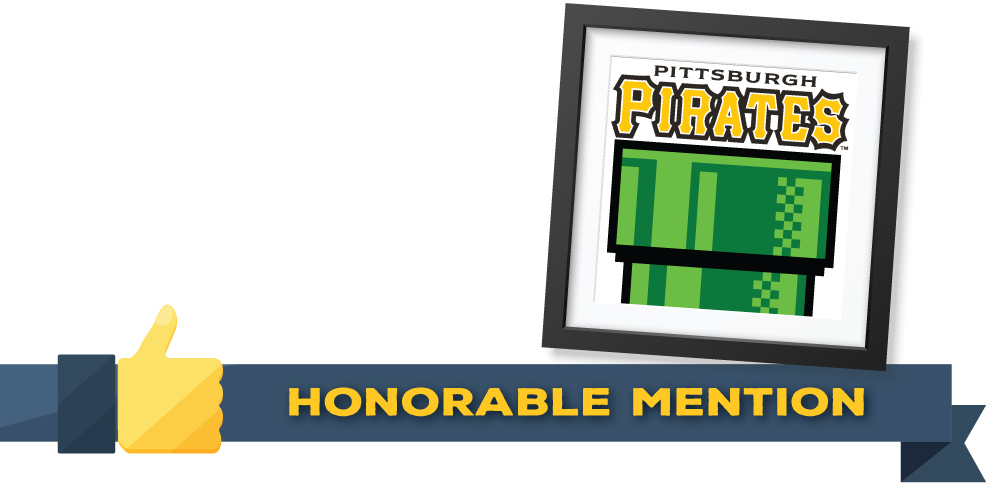 Super Bucco Run combines live action and an outfield video board into a real video game promotion that one panelist deemed “an incredible mix of technology and live entertainment.”

The sponsored race quickly became a fan favorite in Pittsburgh and is likely the start of a trend using scoreboard interactive technology combined with live action. A team executive added “Everyone with a ribbon board should be trying to do their own take on this.”

Also receiving consideration this year was the Dino Dash from the Charlotte Knights and Bandwagon Cam from the Milwaukee Bucks (can be see in our Video Cam Features page).

The Discovery Place in Charlotte sponsored the “Dino Dash”, to help promote their Tyrannosaurs Meet the Family exhibit. We have our contestant race a virtual T-Rex, utilizing both of the team’s video boards. When the race starts the T-Rex is chasing the contestant on the warning track, then after some time the T-Rex transfers from the main board in left field to the Right field wall video board and the finish line, with a great visual ending. Scientists say they could run up to 25 mph, so defeating the T-Rex in a race is no easy task especially at the Charlotte Knights game. 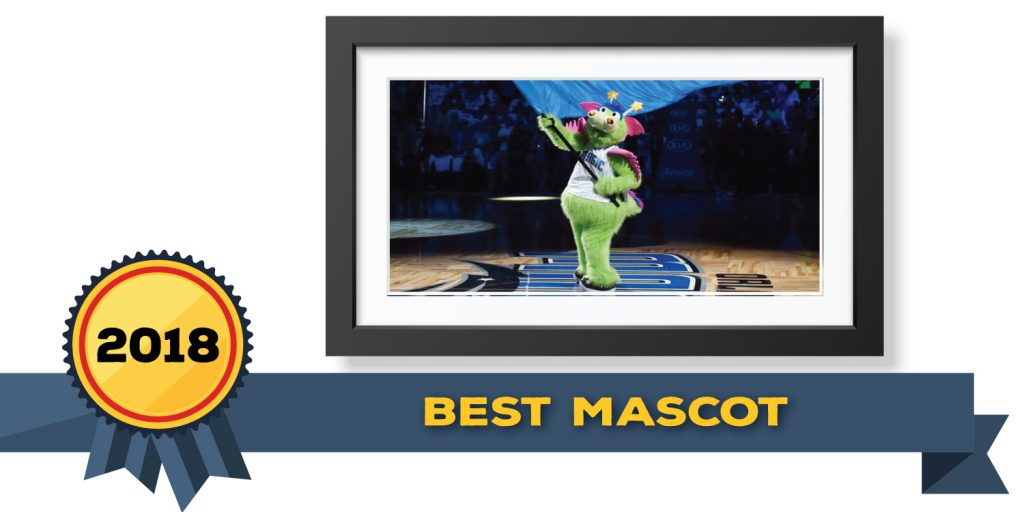 For a record-setting third straight year, Stuff the Magic Dragon (Orlando Magic) takes home the Golden Steagle as the Best Mascot. His work is just head and tails (embarrassing pun intended) above the rest. Acrobatic, funny, well written and innovative Stuff does it all and simply doesn’t cut corners along the way.  His social media work is also innovative  and highlights his value.

Panelists raved about Stuff’s work, including “Stuff continues to amaze me with his stunt work, and overall creativity.” and another raved “Loved the way Stuff built off his regular stunts to ‘super-size’ them.”  His fourth quarter hype pieces are the envy of the rest of the NBA mascot crew as well. 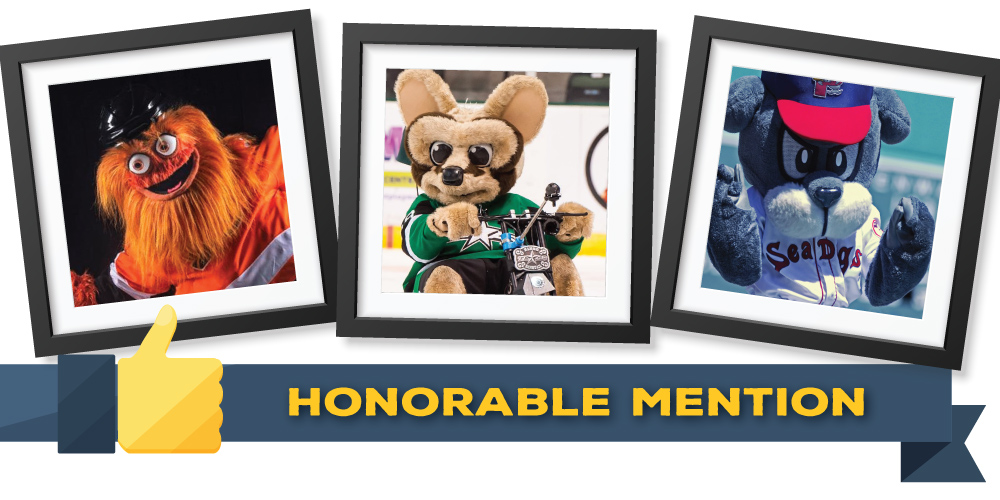 After Stuff the field levels out a bit, but we had three who received frequent mentions from the panel.

Gritty captured the imagination of fans nationwide when he burst on the scene with frightening aplomb.  While the response was clearly a mixed bag, it wasn’t’ long before everyone could name the Flyers mascot (to their therapist).  In recent weeks he has continued to stay in the public eye boosted by his strong social media following and good content.  What could have been a crash-and-burn debut has leveled out into one of the more notable characters in a while.

Ringo is also a new character for the Texas Stars.  This new character is always armed with clever and well designed props and costumes that elevates everything he does.  He also initiated several events that catapulted him into the community like Bingo with Ringo, where he hosts Bingo for event around town.  Star Wars night is not a discounted Halloween costume and a $8 light saber, it looks like this:

Finally, Slugger the Sea Dog (Portland Sea Dogs) also mixes in a high level of costumes and props to his engaging on-field performances. He absolutely stood out from the rest of the field with choreographed dances, on-field skits and fresh social media content highlighting the fun he’s having at the ballpark.

I had the time of my life on 80's Night!! (Watch till the end!) #DirtyDancing pic.twitter.com/M1lVZmZ0wx

Also in discussion this year were Cosmo (BYU) and Timber Joey.  Both are noted on the Audio Roundtable.

Another online example of a mascot providing some fun learning options for fans.

Cudo and Walker look at the best promotions and highlights from the last month and offer and entertaining debate on movie clips and the placement of fan appreciation night.