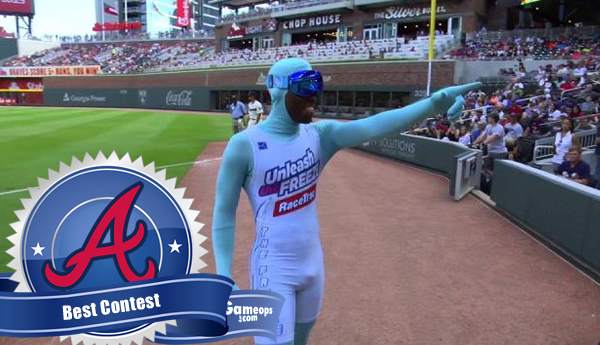 This category ran away from the competition like that Freeze guy runs away from contestants in Atlanta. We use that analogy because Beat the Freeze literally broke into the main stream discussion in perhaps a way no other contest ever has.

In 2016 the Braves discovered they had a world class track athlete (Nigel Talton) working on their grounds crew.  In the final game of 2016 they let him participate in a contest to swap out second base…which he did in record-shattering fashion to the delight of the crowd.  When the Braves were looking for a new contest for a frozen drink they just had to connect the dots to find this greatness.

SunTrust Field fans were quick to take to this promotion, which became a “stay in your seats for this inning break” thing…then one overly confident fan’s pre-finish line celebration created a moment for the ages and launched the promotion into the stratosphere.

this is the funniest thing that will happen at a sporting event this year pic.twitter.com/f6Yq9lErin

Soon after you had about the same chance of seeing how the Freeze fared on ESPN as you did getting the results of the Braves game.

The entire production is masterpiece theatre by the Braves who took the Live Race to an entirely new place and firmly took hold of the Best of 2017 Award for Best Contest.  The Gameops.com Panelists LOVED the Freeze calling it a “legitmate sensation and one called it their favorite on-field promo of all time. 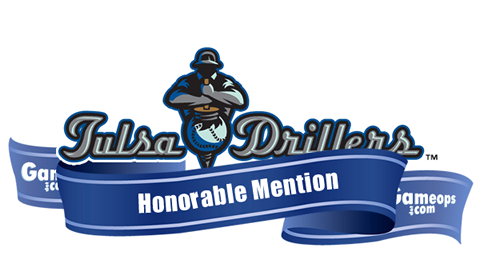 In light of the Freeze the Tulsa Drillers found another race that delighted fans, this time all without the world-class speed of a talent like Nigel Talton.  Instead the Drillers enlisted the help of their Ushers to race fans, with the great twist that the Ushers are racing for their sections.

The charm of this promotion and its ability to be duplicated held strong appeal for several panelist who even liked this more than the Freeze, using these lovable “Stadium Celebrities” to create a memorable moment.

Also receiving acclaim this year was the Celery Race with the Buffalo Bisons who cashed in on the 0-449 mark Celery had posted in his first 449 “Wings, Celery and Cheese” Race.

Listen to the Best of 2017 Audio Round Table discussing all the categories and winners with out panel of Jon Cudo, Scott Carter and Benjamin Hill.- December 2017 Podcast 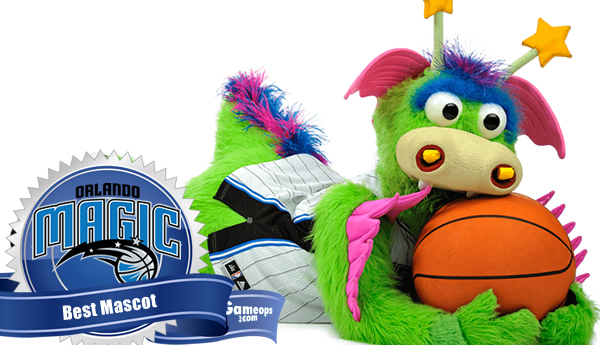 For the second straight year Orlando’s green dragon has come out on top of the furry mountain of talented mascots.  Stuff has been a notch above his NBA brethren with really strong creative writing and unmatched physical skills.  He has the rare combination of crazy athletics that can hype the crowd along with the ability or leave them laughing with a clever video.  One panelist noted “Stuff had the best reel (see below)”…which was likely due to Stuff is doing the best stuff. Orland may not have a winning team on the court, but their mascots is a winner and on a roll dominating the game operations and entertainment scene.

One panelist had the opportunity to work with Stuff directly and noted his professionalism away from the crowd and his understanding of the goals of the event they were working.  Stuff put his creative energy to making the event great over trying to make himself the star of the show. 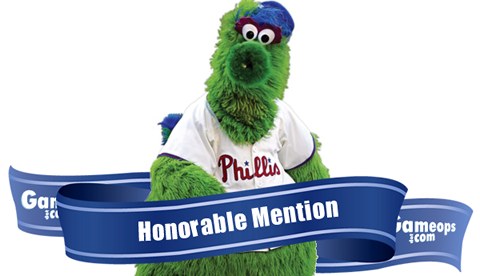 Stuff was the only large bright green furry creature getting out attention this year.  The Philllie Phanatic continues to set the bar for professional mascots.

One team executive explained “The mascot business is all about innovation based in imitation. A lot of what 90% of mascots do the Phanatic already DID. One of the all-time greats that still stays relevant and never rests on laurels. Hard to argue with this pick.”  And he’s right.  He’s not just executing the classics well, he’s writing the classics still.

Also getting love from our panel were The Gorilla and Gnash.

and if you want the full story of the Phanatic:

More animals on the loose, but more importantly a new challenger to BEAT the FREEZE?

Special Round Table Edition of the Podcast with Jon Cudo, Ben Hill and Scott Carter talking about the 2017 Best of Gameops.com Awards.