On this Day in 1974, the Cleveland Indians held one of the most infamous promotions in sports history. 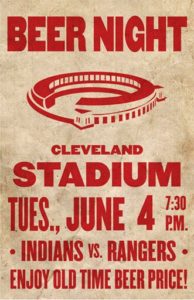 The Indians had previously held Nickel Beer Day in 1971 without incident, and other discounted Beer Nights….but this game was, um, special.

Historical Note: Regular price for a beer was $.65

Cleveland’s Ten Cent Beer Night over 25,000 fans to Cleveland Stadium for the Tuesday night game, twice the number expected.  It was on the heels of a bench-clearing brawl between the Rangers and the Tribe a week earlier, signaling a feisty spirit in the air.

Following that game a Cleveland reporter asked Rangers manager Billy Martin “Are you going to take your armor to Cleveland?” Martin replied, “Naw, they won’t have enough fans there to worry about.”

Fans did come to the game and were part of the “show” throughout the game:

And then it got a little more interesting.

Late in the game things took a bad turn.  This summary from Wikipedia:

Cleveland manager Ken Aspromonte ordered his players to grab bats and help the Rangers, attacking the team’s own fans in the process. Rioters began throwing steel folding chairs, and Cleveland relief pitcher Tom Hilgendorf was hit in the head by one of them. Hargrove, after subduing one rioter in a fistfight, had to fight another on his way back to the Texas dugout. The two teams retreated off the field through the dugouts in groups, with players protecting each other.[9]

The teams fled into their clubhouses and closed and locked the doors. The crowd pulled up and stole the bases and anything else it found. Rioters threw a vast array of objects including cups, rocks, bottles, batteries from radios, hot dogs, popcorn containers, and folding chairs. Umpire crew chief Nestor Chylak, realizing that order would not be restored in a timely fashion, forfeited the game to Texas. He too was a victim of the rioters, as one struck and cut his head with part of a stadium seat[12] and his hand was cut by a thrown rock. He later called the fans “uncontrollable beasts” and stated that he’d never seen anything like what had happened “except in a zoo”.[13]

The night has gone down as one of the most infamous promotions in sports history. Perhaps one of my favorite anecdotes of the promotion was this….

The next Beer Night promotion on July 18 attracted 41,848 fans with beer again selling for 10 cents per cup but with a limit of two cups per person at the reduced price.

THEY DID IT AGAIN!

Footnote: NBC newscaster Tim Russert, then a student at the Cleveland–Marshall College of Law, attended the game. “I went with $2 in my pocket,” recalled the Meet the Press host. “You do the math.

Two soccer teams lead the way in remembering 9-11, as well as related links to 9-11 coverage and US Flag displays.

Suns are Rodeo Clowns for one night only…and it’s spectacular.